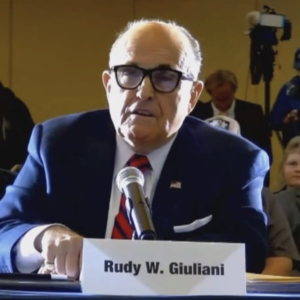 At a hearing before Republican state legislators in Pennsylvania on Wednesday, Rudy Giuliani described an election that was rife with fraud in three counties in particular — Philadelphia, Allegheny and Delaware — making his case that what happened in Philadelphia and Pittsburgh was part of a “common plan” constructed by the Democratic Party to cheat using absentee ballots.

The plan, he said, was implemented in several other cities controlled by Democrats, including Milwaukee, Detroit and Las Vegas.

The hearing, before the Pennsylvania Majority Policy Committee, took place in Gettysburg, not far from the Civil War battlefield and close to the spot where President Abraham Lincoln gave his most famous address. State Sen. Doug Mastriano (R-33), who’d requested the hearing, referenced Lincoln’s speech in his opening statement.

“He said that this nation, under God, shall have a new birth of freedom and that government of the people, by the people, for the people shall not perish from the earth. And, everything is at stake in what happened during this election cycle. Everything. The Republic is at stake. This is no game for us,” Mastriano said.

In his opening remarks, Giuliani called Pennsylvania’s vote-by-mail law passed last year, Act 77, a “terrible mistake,” saying it “allowed the leadership of a party that had become pretty expert at voter fraud to really go wild.”

He focused his testimony on the 682,770 mail-in ballots from Philadelphia and Allegheny counties, saying it appears that all of them were processed without Republican observers allowed to see what poll workers were doing.

“Republicans were uniformly not allowed, kept out, put in chutes, like they were cows, to keep them from seeing these ballots,” he said, adding that according to all of the witnesses, many of whom had worked as election observers for 20-30 years, this had never happened before in any election.

He said the 682,770 mail-in ballots were separated from their envelopes with no Republican witnesses nearby and therefore can never be validated, as they can’t be matched to a legal voter.

He told the legislators that if they don’t disqualify the ballots, the 74 million Americans who cast legal votes this year will be disenfranchised.

He also spoke of an “enormously puzzling statistic,” saying the state sent out 1.8 million mail-in ballots and received back 1.4 million, but that 2.5 million were counted as votes for president.

“I don’t know what accounts for that 700,000 difference between the number of ballots you sent out and the number of ballots that ended up in the count,” he said. “That number — 2,589,242 — was on your government website until yesterday, and yesterday, it was removed without explanation. I’m going to be very interested in hearing what the explanation is, and I can’t imagine you could possibly certify without knowing the explanation to that.”

The first was an attorney named Justin Kweder who said he spent several days at the convention center in Philadelphia as an observer, where the mail-in ballots were being processed.

“The Philadelphia Board of Elections processed hundreds of thousands of mail-in ballots with zero civilian oversight or observation,” he told the legislators.

Kweder said the observers were all kept behind a fence that was erected in a large room and that the masked workers who were counting the ballots were between 10 and 200 feet from them, and that they were not allowed to challenge any ballots.

He also said stacks of ballots were given to workers to “duplicate,” and it was explained that these were to replace ballots rejected by the tabulation machines.

Three other observers, two from Delaware County and one from Allegheny County, gave similar testimony, saying hundreds of thousands of ballots were processed while Republican observers were kept at great length or — in the case of Delaware County — even locked out of the building.

One, a computer forensics expert, said the process he witnessed was “forensically destructive” – explaining that no recount could ever verify that votes were legal votes because ballots were separated from envelopes with no observers present. He also said he witnessed a broken chain of custody of ballots, disregard for all procedures outlined by the county canvassing board, USB cards inserted into voting machines 24 times and boxes containing about 70,000 absentee ballots left in a back room after all ballots had been counted.

On the second panel, an electronic warfare expert named Phil Waldron said he and other academics who have been working on the issue of election manipulation estimate that “up to 1.2 million Pennsylvania votes could have been altered or fraudulent” and that “only a detailed forensic analysis of the actual machines and software will truly show how many Pennsylvania citizens have had their civil rights violated.”

Pennsylvania certified the results earlier this week that Democratic candidates Joe Biden and Kamala Harris won the election. The Biden ticket garnered 3,458,229 votes to the Trump ticket’s 3,377,674 votes, a margin of 80,555.

However, any further certifications ended Wednesday when Judge Patricia McCullough, ordered that no more steps be taken to complete the certification until a hearing on Friday in a case asserting that Act 77 — the mail-in voter law — violates the state constitution.

“[T]o the extent that there remains any further action to perfect the certification of the results of the 2020 General Election … for the office of President and Vice President of the United States of America, Respondents are preliminarily enjoined from doing so, pending an evidentiary hearing[,]’” McCullough wrote.