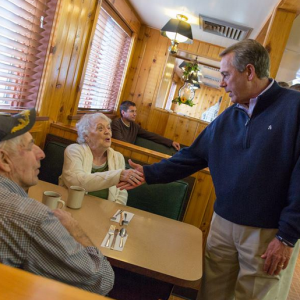 In Praise of John Boehner, the Person Not the Politician

On any given day, you can read criticism of the Speaker of the House, John Boehner. From the left, he is guilty of not leading as a result of being captive of the Tea Party contingency. From the right, the Speaker is a Republican In Name Only (RINO), ready to compromise with Democrats at the drop of a hat. From where I sit, however, John Boehner is exactly the right man for the job.

Let there be no confusion. John Boehner is a principled conservative who believes in meeting the responsibilities of governing. Sometimes that does involve compromise, but not abandoning your basic beliefs. That is not what I want to write about today. Instead, I want to spend some time on the personal qualities of John Boehner that lead me to hold him in such considerable esteem.

Let me start with obvious disclaimer. I consider John Boehner a friend. Not only that, along with my business partner, Ed Brookover, we have had the pleasure of collaborating with Team Boehner on his campaign advertising for many years. That talented group led by Ryan Day, includes Cory Fritz, Matt Ferguson, Kara Hauck, and pollster Brian Tringali of the Tarrance Group. Collaboration where your ego is parked at the door defines the method of operation in anything that has a John Boehner quotient.

It is no mistake the support for John Boehner to remain in his leadership position is virtually unanimous. John lives by the old Ronald Reagan adage: It is amazing what you can accomplish, if you don’t care about who gets the credit. That attitude permeates everything he does and that the rest of his team does.

In his last reelection ad that ran in 2014, John typified this, saying: “At the end of the day, I’m pretty much just a regular guy who has been given a big job: representing you in Congress.” The reason the ad works is simple. It is not the words themselves that are so brilliant. It is that when John says them, it is beyond obvious that he truly believes it.

John Boehner may be the single best listener I have ever known. He is able to grasp not just the words a person utters, but what that person actually means by saying them. Maybe it was growing up in a big family. Maybe it is being blessed to have a wife (Debbie) who serves as a constant reminder he probably is not even the smartest person in his own house. No matter the reason, when John Boehner leaves a meeting, he knows a lot more about you than you know about him—a clear asset for someone leading others.

What is most special about John Boehner is his loyalty. Not Washington, D.C., politician loyal, but loyal like a platoon leader is to his troops. Lots of folks in politics think loyalty ends at being with you through thick. John is most loyal to you when the situation is thin—a quality hard to find nowadays in our nation’s capital. This is what I admire the most about him. 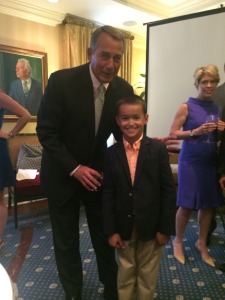 When Baker Hostetler attorney and fellow Ohioan Mark Braden (also a friend of mine) was recently honored as the Republican lawyer of the year, John took the time to come and make remarks. When he walked into the room, my youngest daughter said to my grandson that “this guy (the Speaker) is the third most important person in the country, arguably the world,” drawing an eye roll from the eight year old. My younger son then explained how this could all be true. In a skinny second, my grandson raced to the front of the room to listen to what John had to say. When it was done, I asked John to take a picture with my grandson. He immediately agreed.

John Boehner is a more than a political leader. He cares deeply about making America a better place. That has never stopped him from being able to be what everyone claims they want in their leaders—a real person. There aren’t many like John Boehner, and that’s a shame. So, amidst all the muck, let’s be sure to remember to enjoy this leader. We all owe him a thank you.