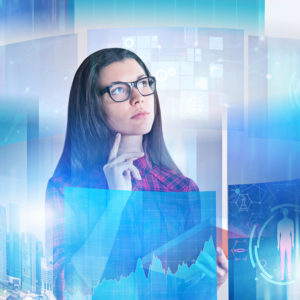 With Women’s History Month coming to a close, it’s a good time to think about the future of female achievement. A few past lessons illustrate how innovation helps make breakthroughs possible. In the 19th century, for example, women moved closer to independence and equality with their male counterparts — thanks in part to the bicycle. Multitudes of women took to the new freedom of the bike and challenged outdated ideas about femininity. The phrase “woman is riding to suffrage on the bicycle” became common.

The story of women’s progress in America is closely tied with innovation and technology. In fact, now as much as ever, innovation is playing a key role in empowering women to make history.

Some society-changing innovations start out simply, as products that seek to save people the time and effort required to do everyday tasks. Household chores like cooking and cleaning were historically women’s responsibilities. Surely, women have successfully challenged that notion. Meanwhile, women were also able to leverage time-saving innovations like the dishwasher and the washing machine to branch out and take part in all kinds of fulfilling work.

The data bears this out. One economic study analyzing census data and technological trends found that labor-saving home appliances enabled women to flood the workforce. Each introduction of a new household innovation — vacuum cleaners, electric stoves, refrigerators and freezers, microwaves, and even good old-fashioned running water — was accompanied by an increase in the labor force participation rate among women.

This trend still holds true today. The Cato Institute’s Chelsea Follett points out that time-saving innovations make it more likely that children, especially girls, in developing countries will be able to attend school, thus increasing the odds that girls become great innovators themselves.

The woman who has the option to leave domestic drudgery behind today could create the tools to liberate the next wave of creative minds tomorrow.

Over the past 20 years, the number of women-owned small businesses has more than doubled, in no small part thanks to the internet removing many of the barriers that have prevented women from pursuing entrepreneurship in the past. As just one example, today, a woman with a creative talent can more easily turn that skill into a business thanks to various online platforms. 26 percent of the online marketplace Etsy’s sellers had no paid employment before starting their online stores. 38 percent were homemakers or stay-at-home moms using their passions and talents to sell everything from toys to furniture to jewelry.

Of course, growth isn’t limited to small business. From 2009 to 2014, the number of startups with female founders nearly doubled. Investment in such companies is also growing. While they still make up a small percentage of overall investments, female-founded startups raised a record $2.3 billion in 2018 alone.

They say well-behaved women rarely make history. The same is often true for the innovations that radically transform our lives: the most promising are not always best achieved by strictly following the rules. As my Mercatus Center colleague Adam Thierer has pointed out, innovation often requires “technological civil disobedience” where innovators refuse to let the rules get in their way of solving problems.

While innovators may not set out to break the rules, they refuse to let them get in their way. So whether it’s a mom selling food over Facebook to support her family without going through restaurant-level inspections, or a young woman turning to an app that can provide birth control prescriptions in contraceptive deserts, women who see a problem or have a passion are going after the solution and working around the rules when necessary.

The storied computer scientist Grace Hopper is often credited with coining the phrase “permissionless innovation.” This is not surprising, given her famous attitude towards rule-bending: “It’s easier to ask forgiveness than it is to get permission.”

Hopper’s viewpoint is a fundamentally feminist one. This ethos is also at the heart of the American approach that has given birth to everything from bake sale liberation to Silicon Valley Internet startups. New innovations like autonomous vehicles and robots will only further improve the lives of women if we embrace them.