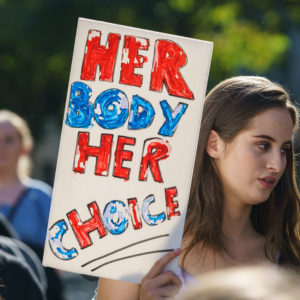 The Iowa House of Representatives Human Resources Committee has approved and amended a Senate bill prohibiting the sale of fetal body parts, creating a new Iowa abortion law that would ban all abortions in the state after six weeks, or the point at which a fetal heartbeat can be detected. Should the House approve the legislation on the debate floor, it would make Iowa abortion law the most restrictive in the county, and could also cost the state its only OB/GYN residency program.

Last week, the committee reviewed and amended Senate File 359, prohibiting the sale of fetal body parts, which passed the Senate by a vote of 43-6, last year, to prohibit any abortion taking place beyond six weeks of pregnancy, the point at which a fetal heartbeat can be detected via ultrasound. The amendment to the bill could be considered a revival of Republican-controlled legislature’s commitment to enacting stricter abortion laws, following a failure to ban abortions entirely, last year.

With Iowa’s second funnel week having concluded on March 16, the Senate’s six-week abortion ban legislation (passing on Feb. 28) didn’t survive the second funnel deadline. While the House Human Resources Committee was given the bill, Chairman Rep. Joel Fry did not put the bill to a vote. Instead, the committee attached an amendment to the fetal body part bill that shares nearly identical text of the fetal heartbeat bill that passed in the Senate.

Both bills would transform Iowa abortion law, making it illegal to perform an abortion post six weeks of pregnancy, except in the case of a “medical emergency,” which is defined as a circumstance that would safe the life of the woman if she is endangered by a physical disorder or injury. The psychological, emotional, familial impacts do not qualify as emergencies, and neither do the age of the pregnant woman.

While arguments both in support and against the legislation take traditional sides of the debate, one point of contention among those against the legislation would be the possibility of the University of Iowa losing its accreditation for its OB/GYN residency program accredited by the Accreditation Council for Graduate Medical Education (ACGME). In a Senate Subcommittee during the debate of the Senate Bill, Democratic Majority Leader Janet Petersen argued that the university would lose its accreditation, resulting in fewer providers of OB/GYN care across the state. According to Petersen, a third of the university’s OB/GYN graduates remain in the state to practice. According to 2014 data from the American College of Obstetricians and Gynecologists, per 10,000 women in the state, there are fewer than two practitioners. There are about four practitioners per 10,000 women between the ages of 15 and 45.

According to a statement given to InsideSources by a ACGME representative, “All ACGME-accredited programs in obstetrics and gynecology must have a curriculum for family planning, including experiential training in the complications of abortions and the opportunity for direct procedural training in terminations of pregnancy. Access to experience with induced abortion must be part of the curriculum in order to ensure that physicians in training have the opportunity to gain the experience necessary to care for all of their patients’ needs. Programs with restrictions to the provision of family planning services or the performance of abortions at their institutions must arrange for such resident training to occur at another institution.”

As to whether or not the university could lose the accreditation, the statement said, “The ACGME is unable to predict the impact in the local context of such legislation on a program’s ability to successfully comply with accreditation standards. The ACGME defers to the programs and sponsors to comment on whether they believe the implementation of pending legislation would impact their ability to adhere to these requirements for training physicians.”

The university could orchestrate an experience at another university, which is allowed in order to maintain the accreditation, however this would mean that the university needs to coordinate with an out-of-state institution to complete the program. This would make the program less appealing to residents who don’t want to pay the extra costs for the program. According to an interview with the university’s program director, Dr. Marygrace Elson, losing the accreditation would also impact sub-specialties like maternal fetal medicine, gynecologic oncology, reproductive endocrinology and infertility, female pelvic medicine and reconstructive surgery, and neonatology programs.

The university wouldn’t lose its accreditation overnight, according to ACGME, but would go through an annual review process, in which citations would be given to the program, before it loses the accreditation. However, for prospective residents, seeing a program with citations can be construed as a warning to not attend the program.

Democrats requested a public hearing of the legislation earlier this week, drawing both sides of the bill to the capital to a standing room only crowd that extended from the Supreme Court Chambers and around the rotunda. With the committee passage, the bill awaits a debate in the House, where Speaker Linda Upmeyer will decide whether to bring it forward or not.

Supporters of the bill not only want the legislation approved to prohibit abortion, but for an opportunity to challenge the Roe v. Wade decision. Previous states have passed restrictive abortion laws that have been struck down in district courts. The House amendment would still allow Iowa abortion law, a 20-week ban, to stand while the courts review the legislation. The Senate bill, if approved, would have erased the 20-week ban, ridding Iowa of all abortion laws while held up in court.