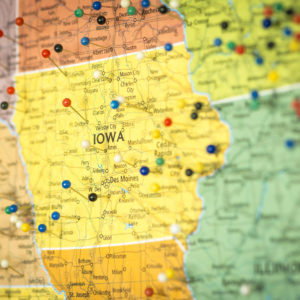 Could Democrats’ Path to Retake the House Hinge on Iowa?

According to the most recent ratings from the highly-regarded Cook Political Report, released less than two months away from Iowa’s primary vote, most of Iowa’s congressional races will safely stay with incumbents this cycle, but the District 1 race appears set as a pure toss up.

The Cook Political Report rates House seats on a six point spectrum, running from “Safe Democrat,” all the way to “Safe Republican.” In between are ratings for “Likely” going to a party, or the seat may “Lean” toward a party. And then there’s the “Toss Ups.”

Congressional District 1 is currently held by Republican Rod Blum, who’s held the seat since first being elected in 2014, after receiving 51 percent of the vote, defeating Democrat Pat Murphy. According to the Cook Report, Blum’s seat is a “Republican toss-up” seat, meaning that the seat will be contested.

“In [District 1], Democrats have a voter registration advantage of about 16,000 over Republicans but No Party voters outnumber Democrats by almost 35,000,” said University of Iowa Professor of Political Science Tim Hagle. “Democrats have an advantage in [District 1] even with a slightly higher turnout percentage for Republicans, but the much larger number of No Party voters means they will likely make the difference here as well.”

Congressional District 3 is currently held by Republican David Young, who’s held the seat since elected in 2014, after receiving 53 percent of the vote against Democrat Staci Appel. According to the report, Young’s seat “leans Republican,” and he is most likely to hold on to the seat, albeit in a close election. According to registered voter data, the playing field in this district is more even, though leaning Republican, with 169,677 active voters in the district. Democrats have 158,036 active voters, while the district’s active No Party voters top out at 169,139. Libertarians account for 3,177 active voters.

According to Hagle, Iowa’s track record is to come out in full support of its incumbents. In 2016, Blum won an election against Democrat Monica Vernon by approximately 30,000 votes, or 8 percent, while Young defeated Democrat Jim Mowrer by over 45,000 votes, or over 13 percent. Hagle said Democrats in District 3 will have a harder time defeating Young, given the disparity in active voters, as well as Republicans outnumbering No Party voters.

“Republicans tend to have a higher turnout rate by a few percentage points, but even though No Party voters have a lower turnout rate they will still make the difference in the election,” Hagle said. ” The key will be getting them, as well has the party’s base, to vote for the candidate of one party or the other.”

Hagle said that the voter registration advantage suggests Democrats have a better chance in District 1 than District 3. Hagle said that it appears that the Democratic Party has historically put “more effort” in recruiting formidable candidates to take on Blum in District 1 when it comes to Iowa Congressional Seats, but have not been successful. Abbey Finkenauer appears to be the front-running candidate for the Democratic Party, having approximately $379,066 cash-on-hand at the end of the 2017 reporting period, and nearly $200,000 more than the next Democratic candidate. Finkenauer is from Dubuque and has represented Iowa House District 99 since 2014.

Democrats’ situation in District 3 has been shaky over the last month, following a petition filing debacle that resulted in nationally recruited Theresa Greenfield not qualifying for the ballot, after her campaign manager forged signatures and she couldn’t field enough signees before filing deadline. Iowa Attorney General Tom Miller, a Democrat, advised Iowa Secretary of State Paul Pate that the Democratic Party couldn’t list Greenfield on the ballot as it was unethical in the primary process. Candidate Austin Frerick openly endorsed candidate Cindy Axne, and has moved on to work for candidate J. D. Scholten (Democratic candidate competing in District 4 against King), withdrawing himself from the race. Three candidates remain in Axne, Eddie Mauro, and Pete D’Allessandro, who was most recently a top Iowa aide to Bernie Sanders in 2016, and has received Sanders’ endorsement.

District 4, held by Republican Steve King, and District 2, held by Democrat Dave Loebsack are both considered safe for the incumbent party by the Cook Report. Still, Hagle said that the election is going to come down to No Party voters, who historically don’t vote in large numbers.

“Although some No Party voters certainly lean more to one party or the other, as a group they clearly aren’t as tied to a party and are more likely to vote for a particular candidate based on that person’s attributes or policies, or not vote at all,” Hagle said. “That’s even more so in midterm elections unless one party or the other can ‘nationalize’ the midterms.  That doesn’t seem to be happening yet, so the races in [District 1] and [District 3], and other congressional districts, will tend to focus more on the specifics of those districts.”

According to University of Virginia’s Center For Politics’ Larry Sabato, Democrats will need to pick up an additional 25 seats in the 2018 midterms to flip the House. To do so, it’s very likely they will need at least one of Iowa’s Republican districts to flip to blue.

None of the districts, even District 1, is a safe bet for Democrats. What is a sure thing is that both parties can be expected to spend a lot of money in Iowa over the next seven months.

This article was corrected to reflect that Austin Frerick works for candidate J. D. Scholten.