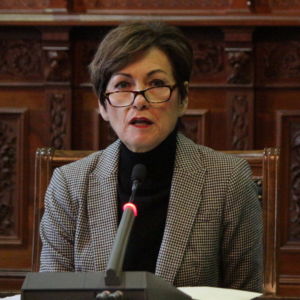 What’s on Iowa’s Legislative Agenda for 2018?

Ahead of Iowa’s 2018 legislative session, both Senate and House leadership and the governor assembled for the annual Associated Press Legislative forum to discuss the governing bodies’ priorities this year and their respective approaches and philosophies. Lawmakers commented on several issues, most importantly the state’s upcoming efforts at tax reform, now that federal tax reform has been signed into law.

Tax Reform
Governor Kim Reynolds told reporters that she will be unveiling her office’s tax plan at her Condition of the State Speech on Tuesday, January 9, and made no comments to direct questions about her ideas. As Iowa is one of six states with federal deductibility (which allows residents to deduct their federal taxes paid from paychecks and in payments made to the federal government), she said that her office would have to analyze the impact of the federal tax plan in order be “fiscally responsible and sustainable,” before even considering taxing that “windfall” of money to Iowans.

Both Reynolds and legislators said that there is no written timeline for when tax reform will be passed. Both Senate Majority Leader Bill Dix (R-District 25) and Speaker of the House Rep. Linda Upmeyer (R-District 54) told reporters that there is currently no draft of the bill in circulation, and that both of their respective caucuses will have future meetings to discuss what reforms are possible, as well as possible opportunities to eliminate old tax credits and apply new ones. Both said that when legislation is made, it will come from a unified approach between the House and the Senate.

Dix said that in 1997, the state passed legislation cutting the state income tax level by 10 percent, and would view any movement to lower the income tax rate as “positive.”

Budget
In addition to writing tax reform, legislators will also need to address a $37 million shortfall in the budget this session for fiscal year ’18, with no clear targets for cuts, according to legislators. Possible ideas among legislators is scaling back backfill payments to cities and school districts that were promised to them after property tax cuts were passed in 2013, as well as cutting the budget to Iowa’s state universities, on top of cuts that they sustained last year. Reynolds told reporters during the governor’s portion of the forum that it was not in her priorities to reduce backfill payments to cities and schools and said that her budget would reflect that.

Both Dix and Upmeyer said that they did not have interest within the caucuses to raise the Iowa sales tax, but that they would visit it if interest arose. Upmeyer said that her caucus could look into equalizing the playing field with online businesses and Main Street business by enacting sales taxes for purchases made online with companies out of state. Minority Leader in the House Rep. Mark Smith (D-District 43) said that his caucus did not favor an overall sales tax increase due to its impacts on poorer Iowans on goods purchased. Smith said his caucus’ focus primarily is getting the state’s budget back in order and for Iowans to “receive return on the tax dollars they’re paying.”

Upmeyer said that the House’s budget will account for the money that the state has borrowed in previous years to balance the budget, a total of approximately $111 million.

Related to the state’s borrowed money, Upmeyer answered questions regarding a current lawsuit against Reynolds and her budget director, David Roederer, regarding the legality of her transfer of $13 million from the state’s economic emergency fund into the general obligation fund, last year.

In September 2017, it was announced that the state would end the year with a $14.6 million revenue shortfall. Reynolds made the decision to borrow $13 million and couple that with the $1.6 million ending fund balance to cover the expenditures and avoid a special legislative session.

According to the law, money cannot be borrowed from reserve accounts to compensate for shortfalls unless revenue comes in one half of one percent lower than estimated. According to Treasurer Michael Fitzgerald, the revenue was only short 0.15 percent, meaning that the money could not be withdrawn. The law was based off of a schedule in which the Revenue Estimating Conference met quarterly, where as they currently only meet three times per year, leaving the final revenue estimates dated at March 2017.

“I do believe Governor Reynolds was entirely complying with the spirit of the law but you are correct,” Upmeyer said. “It wasn’t the breadth and letter of the law and [the legislature] would be happy to change that.”

When asked to respond to Upmeyer’s comments, Reynolds said that the lawsuit was political grandstanding.

“The budget’s been balanced for three months,” Reynolds said. “This happened three months ago, it’s not new news. We discussed it at length when we made the transfer, it’s now on to 2018, which just happens to be an election year, so it looks like grandstanding to me.”

When asked if she believed she followed the letter of the law, Reynolds said “yes.”

Water Quality
Reynolds told reporters that she wants a water quality bill to be the first thing she signs into law in the upcoming session, bringing the three-year deliberation to the forefront of an “ongoing conversation” in making good on Iowa’s Nutrient Reduction Strategy.

However, the path to producing a water quality bill could be a lot harder. At the end of last session, the Senate rejected a House amendment to Senate File 512, which was actually a House bill (HF 612). Chair of the Natural Resources and Environment Committee Sen. Ken Rozenboom said in an interview InsideSources that the reason for the rejection was due to the funding source for the House’s amendment. Rozenboom said that because the water quality bill is considered new spending, and considering the state’s budget circumstances, changing the funding source of the bill could lead to a fracturing of the coalition behind the legislation.

Upmeyer said that “she’d be happy to accommodate” Reynolds in making sure it’s the first bill she signs, but said that she’d have to canvas the members on their opinions of the bill. Upmeyer reinforced that with two branches of the legislature, the legislative process involves multiple bills, and that “wherever we can find agreement, we’ll do it.”

Smith said that he believes that the House bill is the better way to approach water quality legislation, as it received bipartisan support in the House, with a passing margin of 79-19. The Senate’s bill passed along party lines at a margin of 31-19.

Mental Health
Reynolds declined to go into much detail regarding mental health during the 2018 session, as she would include that in her Condition of the State Address, however she did say that there would be action around mental health services not only overall, but when it comes to Medicaid patients.

Reynolds explained that in 2013, the state shifted from a 99 county system of funding for mental health services, to a regional system to ensure that residents were receiving adequate care, and so funding could be spread out to Iowans in the corresponding regions who needed it. Reynolds said that the system would have to be examined for improvements, but that the state is making progress, having invested $2 billion (a 34 percent increase) since 2013 into mental health programs.

Dix said that there will be a Senate subcommittee tasked with making improvements for mental health in the state, and that there could be legislation this year addressing the state’s system.

Upmeyer said that there would be examinations into the regional system and the tax liability, to see which have taken advantage of applying taxes and which didn’t and the results, and how the state’s privatized Medicaid system was impacting conditions.

Medicaid
Upmeyer told reporters that her caucus has “heard loud and clear” that constituents expect Medicaid to be fixed.

Upmeyer said that legislation would have to be passed before the upcoming session is adjourned to fix the problem.

Reynolds told reporters that fixes to privatized Medicaid do not necessarily require legislation, and that the state now has a new Medicaid director (Mike Randol), and a recently appointed Director of Human Services (Jerry Foxhoven). She said that Foxhoven has solutions to improve Managed Care Organization (MCO) stability, and that she encourages communication between her office and the legislature on Medicaid issues so her office can take action.

Education
Both Reynolds and legislators said that making cuts to education to balance the budget was not in their plans for 2018, and both said that members of their caucus are interested in pursuing school choice legislation, but that new funding for public schools would remain a priority. Last legislative session, that state approved a 1.1 percent increase to education, approximately $40 million dollars.