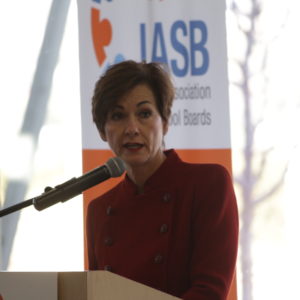 With approximately two weeks to go before the deadline for legislation to be moved out of both Senate and House committees, Iowa public school advocates are confident that the public school system will come out with financial security and equity, as well as come out unscathed by a recent push from school-choice advocates in the 2018 session.

The Iowa Association of School Boards (IASB), an organization that lobbies and advocates for issues that aid local school boards in Iowa school districts, held its annual Day on the Hill conference and lobbying day, in which state superintendents and varying school board members heard testimony from the association’s directors and lobbyists about the impact of the 2018 session on Iowa public schools. While state budget appropriations and initiatives were discussed, and there was a special visit by Governor Kim Reynolds, speakers focused more of their efforts on encouraging board members and superintendents to go on the “offensive” in pursuing two “winnable” initiatives in the 2018 session.

Emily Piper, a lobbying consultant for the IASB, encouraged members to capitalize on the growing legislative support for an extension to the Secure an Advanced Vision for Education (SAVE) program. This program, as of 2008, increased the Iowa state sales tax from five to six percent, with the one percent going to school districts to be used for school infrastructure needs or school district property tax relief. The program was created to alleviate property tax burden by allowing districts to use sales-tax dollars for projects. The program also allows a district to avoid having to bond for money, which often requires a public referendum. The program is scheduled to sunset in 2029. Under a new bill that was authored in the House in 2017, the sunset date for SAVE would be pushed back to 2050. The bill also increases the amount available for the property tax relief fund.

“We have gotten very positive feedback from legislators on both sides of the aisle,” Piper said. “It’s an election year, and [legislators] want to do as much as they can for education.”

The second “winnable” piece of legislation according to Piper is a bill that equalizes current per-pupil funds, currently sitting with the House after being approved by the Senate in 2017. A discrepancy exists between all Iowa school districts. A district in a rural area with fewer students but similar operating costs as a more urban district isn’t given more money to maintain programming. Under the proposed legislation, two divisions would go into effect, creating funding equity throughout all Iowa school districts by 2027.

According to ILSA, if the bill were to go into effect this session, schools would receive an estimated $12.68 million in additional funding in the first year, and $130 million over the 10-year period.

Piper said, additionally, that there is a bill being circulated that would extend the state’s operational sharing dollars program, which allows schools to share up to 21 administrative positions, with a stipend paid to the sharing districts from the state to keep costs low.

One piece of legislation that Piper confirmed was dead is a bill that would move the start date for schools up to August 23, or the first Monday after the state fair. “That bill is dead,” Piper said. “There will be no changes to the calendar. I would love for that to happen but the response I got was that the governor is not interested and the three branches had that fight and they’re not talking about it.”

Piper said a concerning piece of legislation for public school advocates is a bill that would create education savings accounts to allow parents to pay for private education.

“There’s no viable vehicle on [education savings accounts],” Piper said. “We’re waiting to see a bill that chairs of the two education committees produce that will give us an idea. I believe that we’ll see the a 529 plan eligible for k-12 non-public education, but they don’t have resources to do anything else within their own caucuses.”

Other potential legislation would strike income restrictions that currently prevent students from transferring districts, though some advocates claim this could lead to the re-segregation of Iowa schools. An additional bill that could impact transportation costs is one that would extend the maximum amount of time a student can be on a school bus. Currently, a student can only spend a maximum of 75 minutes on a bus, one way. A bill in the Senate Education Committee would allow 15 more minutes to be added to that maximum, and even 30 if parents are notified 30 days prior and the school board holds two public hearings on the matter.