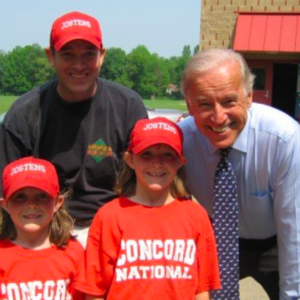 Joe Biden on the campaign trail in New Hampshire during his short-lived 2008 POTUS bid.
News

Is Joe Biden About to Bigfoot the 2020 Democratic Primary?

The political world is abuzz with word that former Vice President Joe Biden is about to jump into the Democratic primary and transform the 2020 landscape.

Biden just told an audience at the University of Delaware that “there’s a consensus” about his possible candidacy. “The most important people in my life want me to run.” And a source close to Biden told U.S. News: “If I had to guess, he’s probably going to do it.”

Meanwhile, the media have been in a frenzy to lock down rumors about Team Biden staffing up in the Granite State. Multiple NH Democratic sources tell NHJournal that just one Granite Stater is on that (unconfirmed) list and, as one longtime party activist said:  “I think maybe twenty reporters are trying to confirm a name, but with no success. It actually is kind of funny.”

It’s also an indication of just how big a player the political press believe Biden would be if he gets into the race.  The polls tell the story:

The fact that Biden continues to lead, despite the campaign going hot and heavy for a month now, shows that his supporters are willing to wait, which likely means–ala Bernie Sanders–they’re going to stick.  And while Sanders is surging in the top line polling, Morning Consult’s Eli Yokley argues that Biden still has a better chance than Bernie to be the nominee, noting:

So if Biden gets in, who does that help and hurt?  The conventional wisdom is that Joe “Moderate” Biden (a description many Republicans reject) closes the centrist lane and all but knocks out second-tier candidates like Amy Klobuchar and Pete Buttigieg. And with Sen. Cory Booker putting so much emphasis on his message of unity and future bipartisanship, Biden’s candidacy would theoretically hurt him, too.

But Democratic State Senator Lou D’Allesandro, considered a key player in the New Hampshire primaries, says he thinks Biden’s entrance will have the biggest effect on Bernie Sanders. “Sanders is representing the strong Left, but I think Biden will pull the entire campaign to the center. And I think he might pull some Sanders supporters with him.”

And it turns out . D’Allesandro is onto something. Look at these Morning Consult numbers asking Democrats backing Biden who their second choice is: 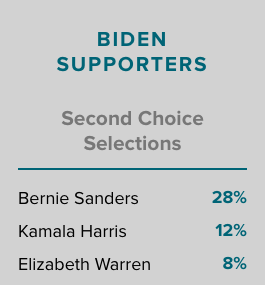 That’s right– “Socialist” Bernie Sanders is at the top, and progressive pro-pot-and-legalized-prostitution Kamala Harris is second, with Bernie fellow-traveler Liz Warren in third.

Part of this is the impact of name ID. When polled, low-information voters are more likely to back a big name like Biden because it’s a name they know.  If you ask for a second choice, they’re likely to name another well-known candidate.

But Sen. Kamala Harris’s name ID is relatively low. Her name on the list points to what many pollsters argue is the key to understanding Democratic primary voters in 2020: They. Want. To. Win.

Joe Biden thinks the best Democrat for the job is...Joe Biden. And based on his enduring strength in the polls, many Democrats agree.