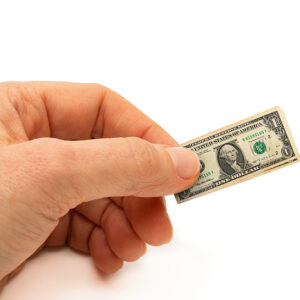 Sometimes, what companies think up in their attempts to maintain profit margins is beyond us consumers. One of the things entering the news cycle is the notion of “shrinkflation.”

It’s exactly what it sounds like, the idea that the cost of the products we buy is being raised by companies, essentially keeping the goods near the same price but shrinking the amount of product we get.

Shrinkflation is just sneaky. It’s one thing when the price of the food we buy goes up 20 percent. We notice it and, of course, we’re not happy. But to have the same package remain the same price but reduce the contents by 25 percent, this is shrinkflation. It’s downright deceptive and the last thing that brands should do if they are looking to maintain long-term relationships with customers.

Some recent examples of shrinkflation that consumers have shared on social media:

—Wheat Thins were 16 ounces to a package but now are 14 ounces.

—Some brands of toilet paper have fewer sheets.

As I ate a bag of Doritos last night, I noticed the package contained 25 percent fewer Doritos.

As for the world of cereal, with some boxes, brands have been even more devious. They’ve kept the height of the box the same but reduced the box’s other dimensions. Why? Because if you reduce the height of the box, unless every other brand on the shelf does the same thing, your box looks smaller. But by reducing the other box dimensions, you can sell less product at your regular price and people won’t immediately notice.

If shrinkflation is an attempt by companies when times are tough to boost their profit margins by offering less product, what about when things get better? When inflation goes down, do we think the companies ripping us off will reverse their course?

Have we really reached the point where this is the way companies feel about consumers who have allowed them to earn a profit for so many years? Evidently so. But the problem is that consumers don’t have anywhere else to turn. While Doritos is playing hard and fast with our emotions and taste buds, so will all of their crunchy competitors. While someone in each product vertical has to go first, their success will have almost everyone else follow. In other words, it’s piling on to create a huge cumulative loss for consumers at the cash registers.

Dayle Lopez, a Seattle lawyer, reminds us that this really isn’t OK, that there’s a fine line here:

In an era where brands need to fight hard to maintain consumer loyalty, what they actually need to be doing is finding ways to extend our dollar. Shrinkflation further tears away the trust between consumers and the companies that they patronize.

With consumer loyalty to brands more important than ever, it’s impossible to see shrinkflation as anything but the brands scoring on their own goal. It is hoped they will also figure this out before losing customers to competitors who keep things honest.