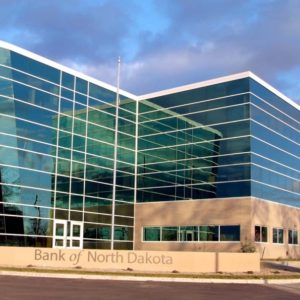 The Bank of North Dakota
News

The Bank of North Dakota: A Solution to Municipal Financing After Divestment?

First it was Seattle, which voted to divest city accounts from Wells Fargo early last year. Then Davis, California, Minneapolis, San Francisco, and other cities followed, citing a range of reasons, including a recent fees scandal and the bank’s support of energy infrastructure development projects, such as the Dakota Access Pipeline. After voting for divestment, city councils are left with a knotty problem: where to put the city’s accounts? To begin, few banks are large enough to handle the size of the deposits most cities need to make, and many of those that are have also invested in fossil fuel development. As a result, more and more city councils have been floating the idea of a municipal bank, a project that would likely be modeled after the Bank of North Dakota.

Considered by many to be America’s only “socialist” bank, the Bank of North Dakota was founded in 1919 by an act of the state legislature. At the time, a party called the Non-Partisan League that united labor organizers and farmers had captured the governor’s office and the state House. Organized by A.C. Townley, a former member of the socialist party, the Non-Partisan League was created specifically to support the social and economic position of the farmer, as opposed to banks in places like Minneapolis and Chicago, which had raised interest rates on farm loans to as high as 12 percent.

Members of the Non-Partisan League believed that the creation of a publicly-owned bank and grain mill would protect them from price gouging. When it opened, on July 28, 1919, the Bank of North Dakota held about $2 million in capital. Its holdings have grown, but its primary deposit base remains the state of North Dakota itself.

Throughout its history, the bank has been focused on the well being of the state. During the 1940s, for example, it sold back farmland that had been foreclosed on during the Great Depression, often to the same families. In 1961, Governor William Guy took office with the belief that the bank should function as an engine for economic development. As a result, he began the process of partnering with other commercial lending groups to extend its loan outreach.

As part of this program, the Bank of North Dakota also offered the first federally-insured student loan in the United States in 1967.

“By helping to sustain a large number of local banks and credit unions, BND has strengthened North Dakota’s economy, enabled small businesses and farms grow, and spurred job creation in the state,” the Institute writes.

The only service it sells directly to consumers is student loans, which comprise about a third of its loan portfolio. In part, this reflects a conscious decision on the part of regulators not to allow the state bank to become a competitor with local lending institutions, but rather to serve in a support role. As a result, much of the Bank of North Dakota’s loan portfolio is comprised of loans that originated in other banks or credit unions, but for which the state bank provided a portion of the funds.

Even so, the Bank of North Dakota operates on a scale much smaller than most of the cities would need. In 2016, the bank set a new record high for its profits, which reached a lofty $136.2 million, up roughly four percent from the year before. When the bank turns a profit, a portion revenues are returned to the general fund, in this case to help the state to handle a budget shortfall.

As cities explore divestment, North Dakota’s example has been brought up more and more.  Its utility may rest on an understanding of how the goals of the projects relate. While places like San Francisco and Seattle are concerned about support for fossil fuels and want control of the loans their deposits are used to fund, North Dakotans were worried about interest rates and created a bank to promote lending. So far, cities rushing into divestment have few clear plans for what to do after making such a drastic move.