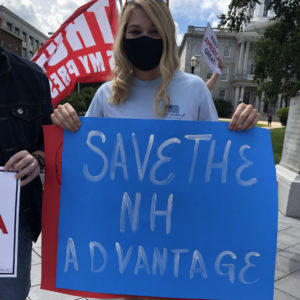 ISAACSON: Massachusetts May Have Crossed Constitutional Line With Tax Scheme

Posted to Politics October 20, 2020 by NHJOpinion

I think New Hampshire has a strong constitutional claim against the Massachusetts Department of Revenue’s effort to reach across its border, by exploiting the COVID crisis, to impose its income tax on New Hampshire residents who are required to work from their homes.  The relevant constitutional issues are admittedly complex (e.g., “nexus” and “sourcing”), and there is not clear controlling precedent.

The Constitution limits the extent to which a state can tax activity occurring beyond its borders. New Hampshire has a serious and credible argument that when an employee is required to performs work in a state different from where his or her employer is located (e.g., the employer’s headquarters or regional office), there are constitutional limits on the extent to which the employer’s home state can impose its income tax on the income earned in another state.

On the other hand, if the employer requires the employee to work in a location different from its headquarters or regional facility (i.e., the work location is not the voluntary choice of the employee), then, under these states’ rules, the employer’s home state may not impose its income tax on the income earned by the remotely located employee.  This situation may arise, for example, where the employer wants the employee to be located near customers in another state.

The Massachusetts DOR has dramatically changed its income “sourcing” rule to the detriment of New Hampshire residents.  In doing so, it may not only have crossed its boundary with New Hampshire, but it may have crossed the boundary set by the U.S. Constitution as well.

Whether the Supreme Court will ultimately agree to hear the case under its “original jurisdiction” authority, with no prior lower court proceedings, remains to be seen.  The Supreme Court can do so under Article III, Section 2 of the Constitution where a state is a party to the litigation, but the Court generally exercises such jurisdiction only in a small number of cases, usually involving disputes between two states over such matters as territorial borders or water rights.