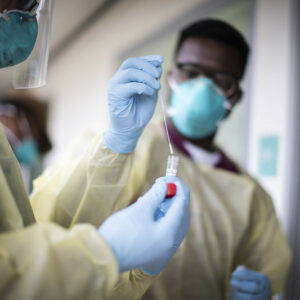 It’s Too Little, Too Late on COVID-19 Testing

He’s right. But the FDA should have reached this milestone months ago. Regulators dawdled, and thousands of people died.

Public health experts have been calling for at-home COVID-19 tests since the early days of the pandemic. With more testing, more people would know they had the virus, stayed home, and slowed the virus’s spread.

For much of the past year, getting tested has been tedious and time-consuming. In the beginning, there was a test shortage. Some patients left crowded testing centers in tears after being turned away. Others had to wait multiple days for their test results.

Even when testing became more widely available, people still waited in hours-long lines or had to visit places like clinics and hospitals, where they faced a greater risk of contracting the virus to get tested.

It took until July — some four months after COVID-19 was declared a pandemic — for the FDA to issue guidelines for approving at-home tests without a prescription.

The technology behind the recently approved at-home tests has been available for months. Abbott Laboratories’ BinaxNOW first launched in August 2020 for use in healthcare settings.  Healthcare providers could obtain the QuickVue test from diagnostics company Quidel as early as December. Yet it wasn’t approved for at-home use until late March.

Defenders of the government’s slowness on rapid tests have claimed that they’re less accurate than the polymerase chain reaction, or PCR, tests that are standard in clinical facilities and typically take 48 hours to return results. They’ve also asserted that ordinary Americans won’t be able to conduct the tests correctly.

But one theoretical model developed by researchers at the University of Colorado Boulder and Harvard this past November found that widespread, twice-a-week rapid testing could reduce the degree of viral infectiousness in a large city by 80 percent. Using more sensitive PCR tests was less effective at suppressing the virus, given the wait for results.

The failure to get rapid tests to market has been costly. Tens of millions of Americans tested positive for COVID-19 between August 2020 and mid-April. Tens of thousands of people died.

How many of those deaths could’ve been prevented if at-home tests had been available — and had prompted infectious people to quarantine?

We can make some educated guesses. Look at the professional sports leagues that instituted daily rapid testing. Throughout the 2020-21 season, the National Football League administered nearly 1 million COVID-19 tests to players, coaches, and other personnel. Those who tested positive, and those in close contact, had to isolate until doctors deemed them safe to return.

The result? An overall COVID-19 positivity rate of 0.076 percent among league personnel — compared to the national average of 6.8 percent over a similar timeframe, according to reporting from ESPN. And though the league rescheduled some games, it never canceled any.

If average Americans had had access to rapid at-home testing, schools, and businesses, society and the economy could have opened up earlier — and much more fully.

The arrival of over-the-counter, at-home rapid COVID-19 tests this spring is certainly a welcome development. But it would’ve been even more welcome if federal regulators had shown some urgency — and ushered them to market last year.