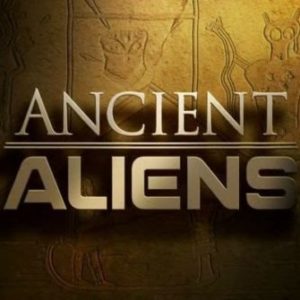 No, you’re not in the Twilight Zone: That really was Hillary Clinton’s 2016 campaign chairman and former White House Chief of Staff John Podesta on Ancient Aliens Friday night.

The long-running History Channel series is a haven for believers in the government/UFO conspiracy, alien abductions, and “The Reptilians.” (Season 8, Episode 5: “Could ancient myths about reptilian creatures provide evidence that they are more than just a pop-culture creation?”). The show has even pondered whether the moon is hollow and houses a secret alien base (Season 11, Episode 11).

This weekend Ancient Aliens kicked off its 13th season with a review of efforts to get the federal government to release its treasure trove of documents and data on what really happened at Roswell, Area 51, etc.

And there—in between artist renditions of flying saucers and interviews with UFO conspiracy theorists like Georgio Tsoukalos and Stephen Bassett—was well-known Democrat politico John Podesta.  Among the conspiracies promoted in this new (ahem) “documentary” is the suggestion that the real reason Hillary lost an impossible-to-lose campaign in 2016 wasn’t the Russians or the FBI.

As conspiracy-debunker Jason Colavito says in his review of the episode:

“The show speculates that Clinton would have led a UFO disclosure movement had she won the presidency in 2016, and there is a strange implication that ‘the CIA and the Pentagon were worried about Hillary Clinton’ and therefore arranged for her to lose the election.”

John Podesta’s obsession with alien encounters and government disclosure is no secret. The Washington Post and others have written about it in the past. And video of Podesta’s 2002 appearance in a press event urging the government to release all its UFO files has a staple of “The Truth Is Out There” documentary industry.

Podesta’s passion has even made an appearance in the #Russiagate story, as InsideSources has reported. Among the Podesta emails released by Wikileaks during the 2016 campaign were several from Blink-182 front man (and UFO activist) Tom DeLonge referencing “Classified Science,” “DOD topics” and Roswell.

What is unusual about the latest Ancient Aliens episode (“The UFO Conspiracy”) is Podesta’s decision to sit down for an on-camera interview, participating directly in the program.

“Right after I left law school, I started working on that at the Department of Justice then at the Senate Judiciary Committee, and then when I worked for President Clinton’s White House,” Podesta says to the camera. “I was one of the people spearheading an initiative to declassify what turned out to be over a billion pages of documents that were resident at the national archives in President Clinton’s case. I think he was interested in the phenomenon.”

Podesta also discusses supposedly alien materials found at alleged UFO crash sites, materials currently in the possession of budget-hotel-billionaire-turned-aerospace-exec Robert Bigelow. “There were also indications that there were certain polymers that were discovered at crash sites that were unexplained and reviewed,” Podesta claims.

Podesta’s expertise on polymers may be suspect, but he knows his politics. In fact, there are a surprising number of political names in the episode: The Clintons; former Senators Harry Reid, Daniel Inouye and Ted Stevens; George Stephanopoulos, even President Obama who, the History Channel reminds us, oversaw the CIA’s release of 13 million documents, many of which related to the UFO issue.

These document dumps, according to conspiracy-theorist Bennett, are “all part of an effort to move us in a direction that we can accept as a society [the fact that] extraterrestrials are here and have been here for thousands of years.”

But are we ready?  “Secretary Clinton was also interested in the topic” of releasing UFO documentation and was very open about that fact “if elected, she would have ordered a more thorough declassification review,” Podesta says.

After this statement from Hillary’s campaign manager, the show’s narrator intones: “Many believe that if Clinton had won, there would have been a seismic shift from the government’s long-held policy of secrecy concerning UFO investigations to a new policy of full disclosure.”

Is this the answer to Hillary’s question “What Happened?” That’s certainly the documentary makers’ implication:

“The CIA, the Pentagon, they were worried about Hillary Clinton…winning the presidency and going to the Pentagon and basically saying, ‘you’re going to get me the information I need to disclose the extraterrestrial presence, or I’m going to fire every single one of you,’” Bassett says.

“As this year of 2016 went forward. We all expected that this headline that we’ve been waiting for that is going to break,” she said. “John Podesta was trying to get ready to open up [the fact] that we’re not alone in the universe.”

“All of that crashed when a different person became president of the United States,” Howe said.

Was Hillary Clinton’s historic loss engineered by shadowy government figures afraid she would expose their relationship with our alien overlords? Was the real villain of 2016 the “Cigarette-Smoking Man?”

The truth it out there. On cable TV. And it stars John Podesta.