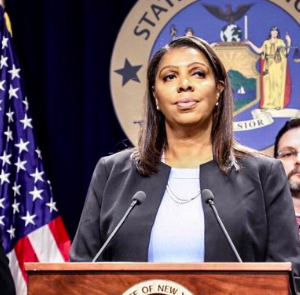 A New York state Supreme Court judge ruled Wednesday that ExxonMobil may access quarterly reports on a special program in the New York Attorney General’s office funded by a private, outside interest that officials have fought to keep secret.

ExxonMobil is seeking the documents as part of its defense against a years’ long investigation and legal wranglings on the part of New York Attorney General Letitia James that alleges the company misled investors about how climate change regulations could impact its business.

Under state Supreme Court Judge Barry R. Ostrager’s ruling, the Attorney General’s office will turn over the reports to him, and he may decide to provide them to ExxonMobil after review. The reports presumably will show what Special Assistant Attorneys General Matthew Eisenson and Gavin McCabe, who are funded by Bloomberg Philanthropies through the NYU Law School’s State Energy and Environmental Impact Center, have been working on since joining the office in 2017.

Eisenson signed the Attorney General’s lawsuit against ExxonMobil when it was originally filed last year.

The Bloomberg-funded program places lawyers with five to 10 years of experience practicing environmental law into Attorneys’ General offices to “advance progressive clean energy, climate change, and environmental legal positions,” according to an email obtained by a former fellow at the Competitive Enterprise Institute who has been pursuing information on the program. There are at least seven states, including New York, that participate in the program. The Wall Street Journal called the program “ethically dubious” in a recent editorial and noted that documents being sought by legal observers and ExxonMobil “may reveal a trail of influence peddling.”

At the hearing this morning, Ostrager dismissed three other potential defenses from ExxonMobil that dealt with allegations of conflicts of interest and official misconduct by prosecutors, First Amendment issues, and due process defenses.

“I am happy with the judge’s decision today and look forward to continuing to make our case in court,” said James, who inherited the case – and the Bloomberg fellows – from her predecessor, Eric Schneiderman.

ExxonMobil has complained that the Attorney General’s office has not filed a “good faith” witness list, instead listing more than 30 names on a preliminary list compared to 10 from ExxonMobil. Lawyers for the company, wanting to avoid what they described as “trial-as-ambush,” said it was “inconceivable” that James’ office does know who they plan to call to testify.

James’ office, however, brushed off that assertion.

“The answer, at this point, is that we just don’t know who we’re going to call,” said Kevin Christopher Wallace, acting chief of the Attorney General’s Investor Protection Bureau.

Ostrager set another conference in two weeks by which time the Attorney General’s office should have its list winnowed down. A final witness list is not due until Sept. 23.

Ostrager put off a ruling on a motion from ExxonMobil that its lawyers be allowed to depose someone from the Attorney General’s staff regarding the office’s document preservation policy and its communications with third parties. Ostrager asked the two sides to each send him letters of no more than three pages detailing their positions.

Another issue that ExxonMobil has pursued is correspondence from Schneiderman’s personal emails that he exchanged with third parties regarding the investigation that began in 2015. Schneiderman has said that he followed standard practice in forwarding all emails to his official account. The company wants a more thorough search of his emails to prove that. The judge ruled that that Attorney General’s office must provide ExxonMobil with a written statement verifying that all emails related to the investigation have been disclosed.

Ostrager also ruled that the Attorney General’s office did not have to release emails from Schneiderman about Matt Pawa, founder of the Global Warming Legal Action Project that worked with state attorneys general, civil litigators, and environmental activists to target businesses. Pawa is widely credited with pioneering the legal approach of using the Tobacco Master Settlement Agreement as a model for climate change litigation. ExxonMobil argued that these emails were relevant due to strong public interest in how the Attorney General’s office is using its resources.

The Bloomberg Philanthropies program of financing lawyers to focus on environmental lawsuits has come under fire from groups such as ClimateWatch.org and the Manufacturers’ Accountability Project. They and others argue that third-party funding for specific types of legal work sidesteps public accountability and politicizes the offices.

“Over the years, significant evidence has been disclosed in the public record showing that the New York Attorney General’s investigation of ExxonMobil–and now this lawsuit–were done in close coordination with outside groups that are financially and politically motivated,” said Phil Goldberg, special counsel for Manufacturers’ Accountability Project. “The goal of these private groups is to weaken the energy manufacturing industry, rather than seeking justice. Today’s hearing helped further expose this unfortunate reality to the public, and we continue to urge the Attorney General to adhere to basic principles of transparency that should be required of every public official.”