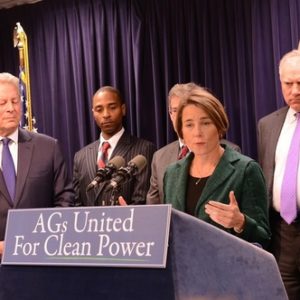 Massachusetts Attorney General Maura Healey is being sued by a public interest law firm for refusing to release documents related to her office’s relationship with a Michael Bloomberg-backed environmental group. The group is using private money to fund activist lawyers to work in her office.

Since 2017, Healey’s been participating in a controversial project that puts “Special Assistant Attorneys General” (SAAG), paid for with private, green-activist dollars, inside Democrat-controlled state attorneys general offices. Their stated goal is “advancing progressive clean energy, climate change, and environmental legal positions,”  according to an email from the State Energy and Environmental Impact Center, the organization behind this effort.

The Impact Center was founded with a $6 million donation from Bloomberg, and its executive director, David J. Hayes, is an environmental official from the Clinton and Obama administrations. At least eight states are reportedly participating in the project— New York, Illinois, Massachusetts, Oregon, Maryland, Washington state and New Mexico—with Healey widely viewed as the leading A.G. in the initiative.

What is not known is what guarantees Healey has made to Bloomberg’s organization, or to the private attorneys involved. On Monday the law firm Government Accountability & Oversight, P.C. (GAO) filed a lawsuit on behalf of the nonprofit group Energy Policy Advocates (EPA). They want Healey to disclose documents she is currently withholding related to the Impact Center and the two attorneys they’ve placed in the Massachusetts A.G.’s Office.

“Healey has brought two Bloomberg SAAGs into the Commonwealth’s top legal office, but to date her Office has refused to release records reflecting what it promised Bloomberg’s group in return, such as its ‘application,'” the EPA said in a statement to InsideSources.

GAO’s Chris Horner told InsideSources Healey’s activities raise serious questions that deserve public scrutiny. “When a major political donor like [Mike] Bloomberg asked the Massachusetts attorney general to lay out how she would use her public office to pursue issues of concern to a donor, and paid for the two mercenaries she has so far brought in to assist her climate campaigning—what did she tell him?

“And when a plaintiff’s lawyer asked Healey to please use her office to investigate the targets of his planned climate tort campaign what, specifically, did he ask her? What did she say?”

The “plaintiff’s lawyer” is Matt Pawa, one of the nation’s leading lawyers specializing in large, class-action lawsuits on environmental issues. Pawa is credited with pioneering the legal liability theory being used by Healey in her high-profile lawsuit against ExxonMobil. Horner’s group is also suing for six pages of emails Healey refuses to release that were sent between January and April 2016 when Pawa was actively seeking “a single sympathetic attorney general” to subpoena private parties’ records, as he called the strategy during a 2012 symposium. Plaintiff’s attorneys see the potential for a big-dollar payday from energy companies similar to the $206 billion Tobacco Master Settlement Agreement reached in 1998.

In fact, the name of the 2012 workshop Pawa attended was “Establishing Accountability for Climate Change Damages: Lessons from Tobacco Control.”

Matthew Hardin, Energy Policy Advocates’ executive director and a Virginia prosecutor told InsideSources the potential for abuse from this arrangement “horrifies” him.

“We have prosecutors taking money from private individuals and then those prosecutors are choosing to engage in that individual’s causes. The idea of prosecuting cases based on who donated money horrifies me.

“Plaintiff’s lawyers with law enforcement power? That’s a merger of civil and criminal law, a merger of government and private power that should scare everyone,” Hardin said.

The concern is progressive politicians armed with both privately-funded lawyers and their office’s police powers might pursue a partisan political agenda to overturn public policy implemented by elected officials. In Virginia, the legislature intervened and blocked Attorney General Mark Herring from bringing privately-funded attorneys into his office. In Oregon, legislative analysis concluded “this arrangement does not comply” with Oregon law.

In Massachusetts, however, no objections have been raised by Healey’s fellow Democrats who dominate every part of the state’s politics except the governor’s office.  The self-declared good-government group Common Cause Massachusetts had no comment about the policy of privately-funded attorneys in the state’s A.G.’s office. Healey’s office will not comment on ongoing litigation.

“There is very little of greater public interest about the Commonwealth’s top law enforcement office than the answers to these questions,” Horner says. “The Office’s behavior suggests that the answers are not good.”

Correction: Contrary to reporting from other sources, Press Secretary Joe Grace tells InsideSources “Pennsylvania’s Attorney General’s Office is not participating in this project, and never has participated in it.”