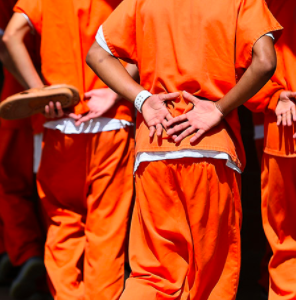 Juvenile Life Without Parole: This is America

April 22, 2021, is a day that will live on in infamy, as the U.S. Supreme Court voted 6-3 (Justice Kavanaugh writing for the Court) to allow juveniles to be sentenced to life without parole.

The case is Jones v. Mississippi, which is about a 15-year old boy who murdered his grandfather, then claimed self-defense, and was eventually sentenced to life in prison. The result of the Supreme Court’s decision, in this case, is that a court sentencing a juvenile does not need to reach a separate finding that the juvenile (under 18) is “permanently incorrigible” before sentencing them to life in prison. Essentially, in Jones, the Supreme Court examined two relevant precedents – Miller v. Alabama and Montgomery v. Louisiana) and held that these cases

“…do not require the sentencer to make a separate factual finding of permanent incorrigibility before sentencing the defendant to life without parole. In such a case, a discretionary sentencing system is both constitutionally necessary and constitutionally sufficient.”

This is a massive blow for judicial advocates who believe that sentencing a juvenile to life without parole is both inhumane and un-American. The American Civil Liberties Union filed an amicus brief in Jones back in September, arguing that “the notion that sentencing children to die in prison runs counter to our constitutional traditions.” After Jones, the ACLU might need to change the tense to “ran,” as even Justice Sonia Sotomayor’s massively powerful dissent is simply a strongly-worded rebuttal in a 6-3 loss.

Sotomayor raises some superb points in her dissent, that in almost any other Court in the past 50 years, should have been the opinion of the court. Perhaps her most visionary words in the Jones dissent were admittedly political theater. As many political pundits have done since Justice Amy Coney Barrett joined to make this a 6-3 ideologically conservative Court, Sotomayor wrote that the present incarnation of the Supreme Court of the United States is “willing to overrule precedent without even acknowledging it is doing so, much less providing any special justification.”

This will be one of the most relevant practical criticisms of Jones as the case ages. Legal precedent, for the less initiated, is referred to as the Latin stare decisis. In Common Law legal systems, stare decisis is the foundation upon which cases are decided. Courts look at legal precedent (similar decisions already made) and decide whether to follow those precedents or set forth compelling reasons not to.

But this is a different Court, as is evidenced by Jones. The warning shot fired by the Sotomayor dissent lines up with what Barrett has already said about herself as a Justice, that she will not be bound by stare decisis. In writing “Now, it seems, the Court is willing to overrule precedent without even acknowledging it is doing so, much less providing any special justification. It is hard to see how that approach is ‘founded in the law rather than in the proclivities of individuals,'” Sotomayor asserts that the current Supreme Court has truly opened not one but two Pandora’s boxes. The first is a willingness to deviate from the longstanding doctrine of stare decisis, but the second is potentially just as chilling to the notion of justice – and that is a court seemingly increasingly intent upon political activism. To be an activist Court in itself isn’t such an exceptional thing, yet to be an activist Court comfortable with doing whatever it wants to “settled law” – as Miller and Montgomery were – is a totally new ball game.

Michele Finizio, a criminal defense attorney in New Jersey, argues the Supreme Court is on a very slippery slope here. “Simply put, it violates the Eighth Amendment for courts to sentence people under age 18 to life without parole. A sentencing court is constitutionally bound to make a separate determination that the juvenile offender found guilty is permanently incorrigible. In deviating from good precedent, the Supreme Court took a bad misstep in Jones.”

Whether the practical result of Jones is “barbaric,” as it was described in Slate minutes after the decision, or simply a “contortion” of precedent, as Sotomayor wrote in her dissent, when the Court becomes comfortable with disposing of solid precedent for no legally-justifiable reason, none of us should be surprised as to the logical conclusion for upcoming cases on the Court’s calendar.