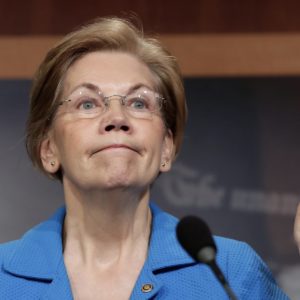 “If we use antitrust law to punish successful competitors, we eliminate incentives for innovation. Government should not be empowered to pick winners and losers in the marketplace,” said AFP Senior Tech Policy Analyst Billy Easley upon the ads’ launch. “To prevent a politicization of an important process, antitrust decisions should be made by the Federal Trade Commission and the Department of Justice — not by political leaders campaigning for elected office. We want to remind lawmakers on both sides of the aisle that antitrust law exists to protect consumers, not to be used as a political weapon.”

But history and economics — and traditional free-market thought — aren’t on AFP’s side.

Antitrust has always been a “political process” — the president picks who heads the Department of Justice (DOJ), after all, and Warren is not the first presidential candidate to draw attention to an industry’s anticompetitive practices. President Theodore Roosevelt campaigned on antitrust issues (then called “trust busting”), and President Donald Trump regularly comments on what he calls the tech industry’s “antitrust situation.”

Jeff Hauser, director of the Revolving Door Project, a project of the Center for Economic and Policy Research, which seeks to “increase scrutiny on executive branch appointments and ensure that political appointees are focused on serving the public interest rather than personal or professional advancement,” wrote in an op-ed that, “American antitrust law is built upon the timeless insight that the ability of dominant corporations’ to sustain dominance unfairly threatens our economic and political liberty. Since unfettered corporations can entrench themselves unfairly, competition regulators should block both mergers and corporate practices that allow already powerful corporations to stifle would-be competitors.”

Standard Oil, started by John D. Rockefeller, routinely underpriced suppliers who did business with oil competitors, and negotiated price fixing agreements with oil refiners and railroads shipping the oil. In doing so, Standard Oil prevented other entrepreneurs and innovators from entering and competing in the oil market.

Progressives and conservatives agree such behavior is anticompetitive, anti-consumer and anti-free market. In U.S. economic history, both left- and right-leaning administrations brought antitrust litigation against big business, from Taft to Reagan to Clinton.

A range of economists and law professors told Senate Democrats and Republicans that antitrust enforcement against Big Tech may be a legitimate way to deal with some of the tech industry’s problems, although there is still some debate over how to measure market power and price within the tech industry, and how to define “consumer benefit” and “consumer harm.”

Hauser notes in his op-ed that where the tech industry is concerned, “America’s cops on the competition beat have grown lazy. They are not enforcing antitrust laws passed during the first Gilded Age to level a playing field tilted by powerful corporations for their own benefit; that’s why America is stuck in a second Gilded Age of economic inequality. These officials have been lulled to sleep by decades of corporate-funded pseudo-economics.”

Elizabeth Warren tweeted a response to AFP last week: “Oh look — the Koch brothers don’t like my ideas. Apparently they’re horrified about any effort to try and rein in the economic and political power of giant corporations. I’m shocked.”