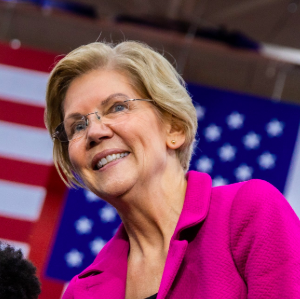 Want a “plan for that?”  Sen. Elizabeth Warren’s got you covered. But a straightforward answer to a simple question? Not so much. And for Democratic primary voters seeking an authentic candidate to take on Trump, that may be Warren’s Achilles heel.

Warren’s speech at historically black Clark Atlanta University last week was interrupted by local parents angry over her anti-charter school stance. Afterward, during what Warren called a “nice conversation,” Sarah Carpenter of the Powerful Parent Network told Warren, “We are going to have the same choice that you had for your kids because I read that your children went to private schools.”

In the exchange, which was caught on video, Warren denied Carpenter’s claim directly: “No, my children went to public schools.”

In fact, her son Alex attended not one but two different private academies, according to reporting from the Washington Free Beacon and The Federalist. Her campaign was forced to “clarify” Warren’s answer, telling Fox News “Elizabeth’s daughter went to public school. Her son went to public school until 5th grade.”

Note that Warren’s answer was technically correct. Both her children did attend public school at some point. But her answer was utterly dishonest, appearing to rebut a claim about her children’s education that was, in fact, true.

Or put another way, it depends on what your definition of “went” is.

For Warren, these questionable, or even outright false, claims are part of a pattern. After months on the campaign trail claiming that she lost her 1971 teaching job when the Riverdale, N.J. school board saw she was “visibly pregnant,” documents from the school system were uncovered proving she was, in fact, offered another year’s teaching contract. Warren wasn’t denied a job. She chose to decline it. And yes, she was pregnant at the time. So, technically, she was pregnant and she stopped teaching. Close enough?

When her “Native American” heritage issue was first reported by the Boston Herald in 2012, Warren was forced to acknowledge that she did, in fact, list herself as a minority faculty member at Harvard, despite her obvious status as a Caucasian woman. “I listed myself in the directory in the hopes that it might mean that I would be invited to a luncheon, a group something that might happen with people who are like I am,” she told the Herald. “Nothing like that ever happened, so I stopped checking it off.”

In fact, Warren had repeatedy claimed Native American status at a series of institutions for years before she got to Harvard, listing herself as an “American Indian” on her Texas State Bar registration card in 1986, for example.

And back when the story first broke, Warren offered a 1984 Indian cookbook edited by a family member, “Pow Wow Chow,” and the recipes she contributed to it, as evidence of her native heritage. In fact, the recipes were fakes, plagiarized from books and magazines and utterly unconnected to either her Oklahoma background or (now-debunked) native heritage.

Her recipe for Crab with Tomato Mayonnaise Dressing, for example, was taken word-for-word from a French chef’s recipe in the New York Times.

Many political observers believe the rollout of Warren’s $52 trillion Medicare For All plan has been a disaster for her campaign, and they wonder why she would release a document with so many difficult-to-defend details. Why not speak in broad strokes like her fellow supporter of socialized medicine, Bernie Sanders?

A review of Warren’s October 15 debate performance, for which she was mocked both on stage and by media allies for refusing to answer a simple and direct question (“Will your plan raise taxes on the middle class?”) provides the answer. A different candidate might be able to get away with Warren’s original rope-a-dope strategy of non-answers. But for Warren, with her track record of unreliable answers, the risk from continued evasions was apparently so great the campaign opted to release an easy-to-target plan instead.

Whatever the cause, Warren’s decline in recent weeks is beyond dispute. Just over a month ago, Warren was at 28 percent in New Hampshire, with a four-point lead over her nearest challenger. Today she’s down to 20 percent and in a virtual tie with Joe Biden and Pete Buttigieg in the RealClearPolitics poll average. The trend in her Iowa and nationwide numbers is similar.

If Warren’s weakness is merely a result of her Medicare for All misstep, it can be fixed. Indeed, Warren is already backtracking from her recently-released proposal.

If, however, Warren’s problem is the perception that she’s willing to play fast and loose with the facts in the name of political expediency, that’s much harder to overcome. For one thing, despite her frequently evasive answers, Warren hasn’t actually evaded all that much. The less-than-comprehensive accounting of her claims of native heritage has only served to keep the story alive, with new, contradictory evidence (like the Texas Bar document unearthed earlier this year) continuing to trickle out.

In fact, one of the more surprising aspects of Warren’s misleading “I sent my children to public school” answer is that nobody in the media had ever done the reporting before. Warren’s campaign had simply evaded the question. Until now.

How does a fact that significant–and problematic– remain a secret about a woman who’s been talking up a POTUS race since 2014?  Does anyone believe there aren’t more such revelations waiting in the wings for the 2020 general election? Imagine what  President Trump could do with a “clarification” like that in the heat of a campaign. Should Democratic primary voters take that risk?

Right-wing talk hosts who call Warren “Lieawatha” are called mean-spirited, but it’s not hard to see why the nickname sticks.