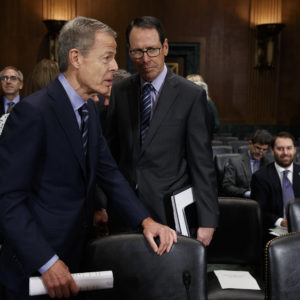 Senators questioned the heads of AT&T and Time Warner on a range of topics related to their proposed merger Wednesday. The companies’ CEOs went on defense about the future of competition, privacy, news coverage and net neutrality if regulators approve the deal.

“On its face, zero-rating appears to be customer friendly,” Lee, chairman of the Judiciary antitrust subcommittee, said. “However critics argue that zero-rating transforms internet service providers or wireless carriers from ‘relatively neutral conduits into gatekeepers.'”

If the pending merger is approved, the wireless carrier plans to make the same offering with Time Warner content, including HBO, while competitors like Netflix, Amazon and Hulu will still count against subscriber data caps. Critics including the FCC and pro-net neutrality groups say that will incentivize users to favor AT&T-owned content.

“Critics say such concerns would only be exacerbated if AT&T were able to bring Time Warner content under its fold,” Lee said.

Time Warner CEO Jeffrey Bewkes and AT&T CEO Randall Stephenson, whose company has yet to respond to the FCC’s latest letter, said AT&T will offer over-the-top video competitors the same rate DirecTV pays AT&T to sponsor its data (a cost the FCC estimates is anticompetitive).

Democrat Sen. Al Franken of Minnesota cited those numbers to Stephenson, pointing out FCC findings that it would cost competitors like Netflix and Hulu more to sponsor data than the $35 AT&T’s new DirecTV Now service charges subscribers, making it “infeasible” for them to compete.

“Explain again how this isn’t anticompetitive, because you’d be taking money out of your right pocket and putting it in your left pocket,” Franken said. “How exactly does DirecTV make payments to AT&T mobility for this service, and do the respective entities record such payments?”

Stephenson said he didn’t know what the payment mechanism was and declined to give specifics, but asserted there was a cost incurred by facilitating the program. He added AT&T will provide that data to the Department of Justice when it reviews the merger.

“We are charging everybody the exact same,” Stephenson said. “The lowest wholesale price per data transport that we have.”

The same net neutrality regulations the FCC is basing its zero-rating investigation of AT&T on will also insulate Time Warner from Federal Trade Commission scrutiny if the merger is allowed to proceed. That’s the result of a case AT&T won over the FTC earlier this year in federal court, where the wireless carrier argued its reclassification as a common carrier under net neutrality removes it from FTC jurisdiction.

Stephenson dismissed the concern, saying, regardless, the company will still be regulated by the FCC. But a technicality that limits the FCC’s authority to common carrier activities could still leave those companies in the gap free from either agency, according to Gene Kimmelman, president of the pro-net neutrality group Public Knowledge.

“If they purchase Time Warner, and they have content, the FCC can only regulate their common carriage business regardless of how the court wanted to look at it,” Kimmelman said. “There is a gap there that I think is significant.”

“And I take him at his word,” Blumenthal smirked to a cackling chamber.

“Why?” Franken cracked in response.

Blumenthal said while he agrees with Trump that “it’s too much concentration of power in the hands of too few,” he’s disturbed by part of the president-elect’s opposition, which Trump said stemmed from unfavorable coverage by Time Warner-owned CNN.

“For a public official to use the blunt, heavy instrument of law enforcement to try to silence or change coverage by a news department of any company is to me, absolutely abhorrent,” Blumenthal said.

The senator asked the CEOs of both companies to commit they won’t pressure their news organizations to alter coverage of Trump in an attempt to get the president elect’s stamp of approval on the deal. All said they had yet to meet with Trump’s transition team, but agreed.

“In terms of the independence of our journalism,” Time Warner CEO Jeffrey Bewkes said, “We have always vigorously defended that for decades, whether when we had Time Inc. or CNN. And we intend to continue defending and being an independent journalistic voice.”

It’s unclear if the deal will face FCC scrutiny. The trigger for FCC review is whether AT&T decides to acquire any of the broadcast licenses owned by Time Warner as part of the merger. Stephenson told lawmakers the company was still making that determination, but added DOJ is likely to seek input from the FCC regardless.

“There’s a different level you have to meet whether it’s FCC or DOJ, and FCC, their merger review requires that any proposed deal actually benefits consumers,” Franken said. “I would think that the message you’re sending to us and the current and potential AT&T consumers, if you can’t confidently assert that this deal benefits the American public, is not a great message.”