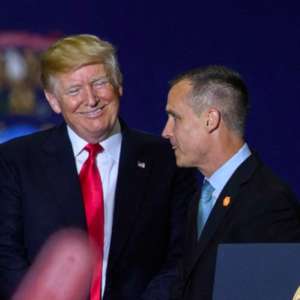 He’s not even a declared candidate, but a single tweet from former Trump campaign manager Corey Lewandowski showed yet again he’s the driving force in the New Hampshire GOP U.S. Senate primary.

On Saturday, Lewandowski (whose Twitter account ID’s him as “Potential US Senate candidate in NH”) tweeted a link to a story about declared GOP candidate, retired Gen. Don Bolduc’s, complaints that Lewandowski’s Senate-race tease is hurting his fundraising. According to WMUR, Bolduc told the Carroll County Republican Committee, “My finances were going really well. It was going well, until the Trump rally” in Manchester this summer. “They slowed down because, not that people think Corey Lewandowski is going to be a great senator, but because President Trump said he would be,” Bolduc said.

“Hey ⁦@GenDonBolduc,” Lewandowski said in his tweet, “you [sic] fundraising sucks because of the candidate. Not because of anything I did. Look forward to seeing you in September 2020 when you endorse me for the General Election. #TeamTrump”

Lewandowski followed up with another tweet disparaging the current field of GOP candidates and teasing yet again his possible entrance into the race:

“The people of NH have had months to hear from some of the other candidates running for US Senate and they still poll in the low single digits. Maybe that’s a sign they shouldn’t run. I’m the only candidate who can defeat @SenatorShaheen. http://standwithCorey.com to show support!”

In the past, the Bolduc campaign has largely ignored Lewandowski’s commentary, expressing frustration with reporters seeking their reaction to his public statements. But not this time.

“Team @GenDonBolduc for Senate will be responding to @CLewandowski statements shortly,” Bolduc spokesperson Josh McElveen said in a tweet. “In the meantime, it’s important to note Lewandowski is not @realDonaldTrump – he’s also not the future of the #GOP“

It may not be inspiring, but fundraising is a key part of mounting a serious challenge to two-term incumbent Democrat Jeanne Shaheen. And in fact, after weeks of assurances from Bolduc circles that he is the candidate of choice for the deep-pocketed GOP establishment in D.C., his fundraising to date has been anemic. Bolduc raised around $100,000 in the months before Trump’s August 14 appearance in Manchester and a similar amount in the months since. As of his September 30 filing, he’d raised less than $250,000 — not close to the millions required for a U.S. Senate race next year.

(Shaheen raised $12 million fending off a challenge from Republican Scott Brown, who raised $6 million in his race. These numbers don’t include tens of millions in outside money that poured into the 2014 U.S. Senate race.)

So why did Bolduc’s team publicly respond to Lewandowski’s insults?

“It’s the general, he’s a fighter,” a source close to the Bolduc campaign told NHJournal. “Someone takes a shot at him, he wants to take one back.”

Other NH Republicans say it’s a sign that the Bolduc campaign is in disarray.

“The Bolduc campaign has serious problems, and this weekend was not a good sign,” one NHGOP insider told NHJournal, pointing to abrupt staffing changes, disappointing fundraising and message discipline issues.

“A lot of Republicans are wondering if they know what the heck they’re doing.”