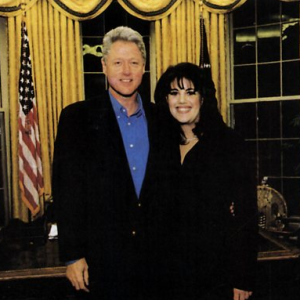 Bill Clinton and Monica Lewinsky in the Oval Office.
[IS] Opinions

Liberals in General, and Democrats in Specific, Have Lost Any Pretense of a Moral Compass

You see it day after day. The mainstream media falling all over itself in an attempt to bury conservatives and the Republican Party for being wrong and out-of-touch with the American public on every issue of importance. Every utterance of Donald Trump is examined. Marco Rubio is made to somehow appear a little sleazy for assisting his brother-in-law, a convicted drug felon, get a license to sell real estate. The drumbeat never ceases.

All the while, the MSM pays scant attention to the recently announced polling numbers that showed the lowest percentage of voters in the 65-year history of the Gallup Poll self-identifying as Democrats (29 percent). It would appear a good idea to examine some of what ails our nation’s oldest party.

From where I sit, I believe the cold, hard reality that the Democrats have lost any semblance of a moral compass is more to blame than any position on a particular issue. Yes, the current President has largely been a failure at home and abroad using any logical basis to evaluate his tenure. It is also true none of this slows Democrats and liberals from lecturing Republicans and conservatives. Other than the demand that whatever Democrats and liberals say is good and right at any given point (thus allowing for more flip-flops than a fish on the beach), our benevolent betters have no set of enduring principles to bind them together.

The total demise of any moral compass gained its primacy during the two terms of Bill Clinton. Time after time, the Clintons (and their supporters) required the rest of us to treat something that had the slimmest of possibilities and plausibility the same as something that was actually true. The whole liberal rulebook on sexual misconduct was thrown into the fire.

Think back, painful as that might be, for a minute. For years we were told that it was impossible for there to be consensual sex any time there was a superior-subordinate nature to the relationship. Then, Slick Willie had his affair with an intern, and suddenly this was no longer the case. One female reporter for Time Magazine (there is no way to call this individual a journalist) famously intoned that she would be more than happy to perform oral sex on the President, if that was required to assure “a woman’s right to choose” had been protected.

Way back in 2008, both Barack Obama and Hillary Clinton insisted they believed in traditional marriage, coupled with a demand we believe them. Today, they argue that anyone who has that same position is guilty of pure hatred.

Not so long ago, Hillary Clinton strongly opposed illegal immigration. Now, she believes that term should not even be used and is opposed to the deportation program being conducted by the Obama Administration.

This past summer Mrs. Clinton tried to peddle the idea that the use of a private server for her email while Secretary of State had not compromised our security, that it did not involve classified material. Never mind that her use of a private server totally disregarded the rules, the number of messages containing classified material has reached more than a thousand (and we are still counting). The most recent revelation contains her giving written instruction on how to pass along material with classified material in it. With a straight face, she claims her intent was just the opposite of what the words on the page state. Again, let’s just pretend what I want to be true is true.

Most famously, Hillary Clinton said that women who accuse men of sexual misconduct deserve to be “believed, trusted, and supported.” This comes from a woman married to a serial offender. When questioned on it, she glibly said women “deserve to be believed until they don’t deserve to be believed.” Funny, not even this much was the case when it involved her husband. No, it was fine and dandy to call Paula Jones “trailer park trash.”

It might well be true that conservatives and Republicans hold too fast to our basic principles and views in some instances where a little flexibility might result in advancing the cause without compromising away what is really important.

For liberals in general, and Democrats in specific, they have the opposite problem. They will say or do whatever is the liberal end point for what the public will accept at any given point in time. History indicates that translates into a willingness to say or do anything so long as it contributes to their gaining or maintaining power.

It can seem to be impossible that liberals are simultaneously guilty of being unyielding and rigid on every matter under the sun and having no moral compass, no real principles. Yet, it is precisely the case. While liberals and Democrats lurch from one position on an issue to another position in complete and direct conflict with the previous position, they do it without hesitation or blushing. They claim whatever their position is on that particular day to be the only reasonable or morally acceptable one. And, everything is a moral issue.

There is only one problem with what liberals in general and Democrats in specific are doing. Their lack of any consistent set of principles, their lack of a true moral compass, is seen with keen clarity by the 71 percent of Americans who do not self-identify as Democrats. More and more, this huge majority is turning its back on the Democratic Party. It’s time for even the mainstream media to wake up and smell this coffee.