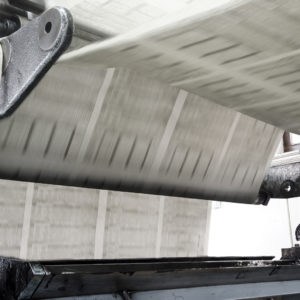 The Boston Globe joined a growing coalition of local papers this weekend urging the federal government to deny the pending $3.9 billion Sinclair-Tribune merger, a transaction combining the two largest broadcast TV station owners in the country, one with a right-leaning political agenda.

An editorial by Globe staff in the paper’s Sunday edition described “right-leaning” Sinclair’s bid to buy Tribune, creating a broadcast giant reaching more than 70 percent of U.S. households — more than Fox, CNN or MSNBC — as “a matter of urgent concern” for “the state of our democracy.”

“An expansion of that size isn’t in the public interest, and federal regulators should move to block it,” Globe staff wrote. “If they fail to act, state attorneys general should step up and attempt to stop the merger.”

But according to the Globe and others, Sinclair’s well-documented history of shuttering local news stations and replacing their content with conservative-leaning editorials masked as news is even more concerning.

“There are daily missives, for instance, from the ‘Terrorism Alert Desk’ — including one piece on the French controversy over ‘burkinis,’ apparently deemed a terrorism-related story simply because it involved Muslims,” the paper says.

Another 2016 segment “suggested voters shouldn’t back Hillary Clinton in part, because of the Democratic Party’s proslavery history” and the broadcaster has hired hired Boris Epshteyn, a former Trump White House surrogate with a history of debunked claims, as its chief political analyst.

That’s cause for even greater concern in swing states like North Carolina, Ohio, and Pennsylvania, where Sinclair already controls stations. The Trump campaign made a deal with Sinclair for better coverage of Trump during the 2016 campaign, according to Politico.

While the Globe acknowledges there are “plenty of competing, left-leaning views in our increasingly crowded mediascape,” it says “local news is a special case.”

“Local broadcasters have something of a captive audience, and federal regulators should be diligent about ensuring a diversity of views,” the editorial reads.

If the deal is approved Sinclair will control more than 200 stations, including over 130 affiliated with the four biggest broadcast networks in the U.S.: ABC, CBS, NBC and Fox. The stations stretch across more than 100 markets, including 40 of the top 50 in places like New York, Los Angeles, and Chicago, where the Chicago Tribune said in August the deal “doesn’t pass the smell test.”

In addition to “consolidating, or outright dumping, homegrown news, weather, sports or other programming” to appease investors and “Sinclair’s hard-right tilt, which manifests itself in conservative commentaries and stories that management insists its stations carry on a recurring basis,” the Tribune warns the real threat is Sinclair’s relationship with the White House.

The deal violates a federal cap blocking any broadcaster from reaching more than 39 percent of the national audience, the result of an outdated technical loophole revived by the Trump administration’s Republican appointee to lead the Federal Communications Commission. Ajit Pai, the commissioner now leading the FCC, met with Sinclair and Trump personally on multiple occasions after the election, before the loophole was revived and the deal was announced.

“Ask yourself: Did this sudden change of heart come because Sinclair’s brass is tight with the Trump administration and its network is home to some presidential surrogates and supporters?” the Tribune editorial reads.

They’re not the only local papers voicing opposition. The St. Louis Post-Dispatch warned in May under the deal “Sinclair would own or control stations that account for more than 40 percent of the Fox Network audience” and “give Sinclair considerable leverage over Fox and cable companies in negotiations over retransmission of local stations’ signals.” Satellite and cable providers brought similar concerns to the FCC, saying those costs will ultimately be passed on to consumers.

The Des Moines Register said in June Sinclair “promises to be a localized and more insidious form of Fox Cable News after its acquisition of Tribune, as its conservative brand of local news media will be present in two major network affiliated stations in several markets across the country.”

“Consider the impact that Clear Channel (now iHeartMedia) had on radio broadcasting after it began gobbling up stations and replacing locally produced public affairs programming with syndicated conservative talk shows, such as Rush Limbaugh,” a former Iowa State University journalism professor wrote for the Register.

But not all papers agree. An August editorial in the Richmond Times-Dispatch said such dire warnings were raised during the first part of the George W. Bush administration, when the FCC considered easing rules limiting the ability of companies to own both newspapers and television stations.

“The argument back then — just as the internet took off — was that joint ownership of a newspaper and television station in one local market would severely limit the sources of news and opinion available to the citizenry,” the Times-Dispatch recalled.

Those efforts failed, and according to the Times-Dispatch, forfeited newspapers “an opportunity to merge with television stations to strengthen local journalism.”

“Some of the same people who 15 years ago opposed more reasonable rules on cross-ownership of TV and newspapers are today bemoaning what they see as a decline in local journalism,” the Virginia paper said.