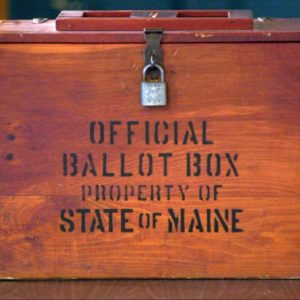 Maine’s top elections official is being sued for failing to hand over a copy of the state’s voter registration roll.

On Wednesday, the Public Interest Legal Foundation (PILF) filed suit against Matthew Dunlap, Maine’s secretary of state, saying he’s violating the National Voter Registration Act (known as the “Motor Voter” law), by refusing a request for a copy of the voter list.

“Secretary Dunlap purports to be a champion of transparency, until it comes to his own office,” J. Christian Adams, president of the foundation, said in a statement. “Maine law conflicts with federal statute. A person or organization’s lack of partisan interests should not disqualify them from reviewing list maintenance records. Maine’s elections records must be made available to the public.”

PILF has been scrutinizing voter rolls in places like Detroit and Broward County, Florida, and filing federal lawsuits to force elections officials to remove the names of dead people, non-citizens, people who long ago left the state and others who are ineligible to vote.

The list of states that refuse to provide copies of their voter roll is shrinking, said Logan Churchwell, spokesman for the foundation. Maine is “one of the last ones standing.”

“We’re accessing rolls all over the country,” Churchwell said. “Maine is just a state that said ‘no.’”

PILF sent its initial request for Maine’s voter roll on Oct. 17, 2019. Dunlap’s office denied access to the roll, citing state law, which says the list can only be provided to public officials, political parties, campaigns and any individual “engaged in so-called ‘get-out-the-vote’ efforts directly related to a campaign.”

In its suit against Dunlap, the foundation quoted a federal court’s 2018 decision in a Broward County case that the public disclosure requirement is to “ensure that election officials are fulfilling their list maintenance duties” and that all records, including the full roll, are “available to any member of the public.”

PILF also made reference to the possibility that people may be voting twice — in Maine and also in another state.

“By denying the foundation the ability to obtain the requested voter registration list, Maine is impairing the foundation’s ability to assess the accuracy of Maine’s voter roll and to determine whether people from other states are voting in Maine elections and vice versa,” PILF wrote.

Maine is a popular summer vacation destination and about 19 percent of the homes in the state — about 143,000 — are vacation homes, according to Chicago company Digital Third Coast.

And there may be other issues.

“The voter file definitely has people on it who are deceased of have moved,” says Jason Savage, executive director of the Maine Republican Party, which uses the voter roll from the secretary of state’s office.

Maine, he notes, has several quirks when it comes to elections. The state has same-day voter registration — with people able to walk in to a polling place on Election Day, register and then vote — without a voter ID. Also, elections are run not by counties but by town clerks. There are 489 municipalities in the state, the large majority of them small towns.

“There’s definitely a vulnerability there,” says Savage. “It’s a situation where, if something goes wrong, everyone can blame it on someone else.”

When reached by InsideSources, a spokeswoman for the Department of the Secretary of State in Augusta said the office doesn’t “comment on pending litigation” but noted Maine follows all requirements of the law to make sure its voter roll is accurate, and added the state participated in the interstate cross-check of voter rolls in 2016.