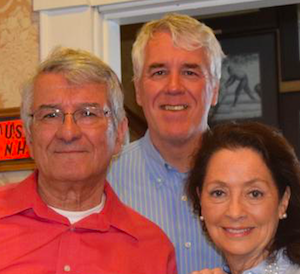 State Sen. Jeff Woodburn faces more than domestic violence and assault charges in the North Country. He now faces a write-in challenge from a fellow Democrat for the party’s nomination. Kathleen Kelley of Randolph announced Thursday she would run for the Democratic nomination in the wake of Sen. Woodburn’s scandal.

“We are weak unless we put forth a candidate who is respected in the community, who is able to lead, who is able to represent us over the next two years without question. You know, what message does this send if we don’t take a stand,” Kelley said in her announcement.

Almost immediately, Democratic gubernatorial candidate Steve Marchand announced that, not only is he endorsing Kelley against the longtime state house incumbent, but he will campaign with her, too.

“I repeat my call that Woodburn should resign his seat and drop out immediately,” said Marchand. “But, he has had two weeks and is obviously not inclined to do so. If he won’t resign, then we must replace him in the primary. Kathleen Kelley, with deep North Country roots, and a strong record as a businesswoman and community leader, is an outstanding candidate, and will make an outstanding state senator.”

And Molly Kelly?  Who has been endorsed by Sen. Woodburn in the governor’s race?

No comment. No public statements, nothing on her website. When the scandal first broke, Kelly joined nearly every other Democrat in calling for his resignation, but thus far she is silent on whether he should be voted out by Democrats in the upcoming primary.