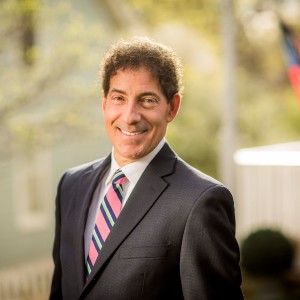 In Maryland 8th Race, a Reflection of the National Debate

Here’s a snapshot of a Democratic primary in early March.

A well-known female candidate with a famous political spouse is vying to break barriers for women, running as “a progressive who gets things done.” She’s up against a longtime lawmaker beloved by the left, and they’re both facing the wildcard of an independently wealthy businessman with enough cash and charisma to shake up the campaign entirely.

No, this isn’t the 2016 race for the White House. It’s another colorful political drama playing out in close proximity to 1600 Pennsylvania Ave., just over the state line in Maryland’s 8th Congressional District. The battleground is a classic gerrymandered House seat representing parts of Montgomery, Frederick and Carroll counties, snaking all the way up to the Pennsylvania border. It’s currently occupied by Rep. Chris Van Hollen, who is running for Senate in a Democratic race against Rep. Donna Edwards.

In terms of personality, each leading candidate in this April 26 primary is distinctive in their own right. The front-runners are Kathleen Matthews, a former Marriott executive and WJLA-TV anchor who’s married to MSNBC host Chris Matthews, and state Sen. Jamie Raskin, the Senate majority whip and veteran liberal activist who’s taught constitutional law for 25 years at American University in Washington.

Joining them with an eleventh-hour entry was David Trone, co-founder of the Maryland-based Total Wine & More, a large wine, beer and spirits retailer. A prolific Democratic fundraiser, Trone entered the race a month ago pledging to self-fund as much as necessary for a strong bid.

Matthews’ campaign manager Ethan Susseles told InsideSources she’s running on creating an inclusive economy, protecting the environment and enacting gun control. He described Matthews as progressive, but called her “thoughtful in her approach to policy, listening to all sides of an issue, including talking to those who may not agree with her.” With that approach, he said, she’ll forge consensus as Van Hollen has.

But Raskin told InsideSources he’s the one who’s actually worked across the aisle, partnering with Republicans in Annapolis on issues such as criminal justice reform. The state senator said he’s done it while being “a relentlessly effective progressive legislator who led the fight in the Senate for marriage equality, to repeal the death penalty, to restore voting rights for ex-felons, and to pass major environmental legislation.”

“Maryland has absolutely leapt to the forefront of progressive change in the country, and all I can say is that I’ve been at the center of these struggles for a decade,” Raskin said. “I never met either of my two major opponents in the course of all those campaigns.”

Until last month, he had only one major opponent, even though half a dozen Democrats were declared. An internal Raskin survey showed the state senator with a nine-point lead over Matthews in November, but it’s unclear where numbers now stand in a race with no public polling. Matthews has opened up a fundraising advantage and run a series of new television ads while he hasn’t been on the air at all. She’s also focused on going door to door during the four days each week he’s at the statehouse. None of Raskin’s other rivals were seen as competitive before January, but Trone has commercials all over television, and he could be swaying business-friendly voters away from Matthews.

Trone told InsideSources he’s the underdog, but also “the one who wants to change business as usual, bringing a new, fresh approach and fresh face.”

“It’s about bringing a different perspective to Washington versus continuing with career politicians,” he said.

Already, these three top candidates have debated over who can best get things done in Congress and questions of money in politics.

“Sen. Raskin clearly would be greatly challenged to work across the aisle in Washington,” Trone said. “In Annapolis, you could pass a law without ever needing a Republican, but as a minority member of Congress you have to work with them.”

But again, the state senator argued he’s been bipartisan.

“I would not only invite you but urge you to call any Republican in the Maryland State Senate and ask about their work with me on a whole host of issues,” he said, citing budget transparency and direct wine shipping in addition to criminal justice. “That’s not rhetoric. That’s real results.”

For his part, Raskin has stressed that, unlike Trone and Matthews, he hasn’t donated thousands of dollars in political contributions to Republicans. Trone called this spending an important part of bringing his company to states across the country, and Matthews noted that her only GOP giving was to a U.S. senator who supported Marriott’s business interests.

Asked if he would ever donate to the politician in question, Missouri Sen. Roy Blunt, Raskin was adamant.

“Speaking only for myself, I would never dream of giving a right-wing, anti-choice, anti-environment Republican a maxed-out contribution,” he said. “I cannot imagine any circumstances under which I would do that as a progressive Democrat.”

Matthews’ campaign chief Susseles emailed InsideSources this statement in response: “Kathleen is a generous contributor to Democrats here in Maryland and across the country including Chris Van Hollen, Ben Cardin and Hillary Clinton. She has given one contribution to a Republican in her lifetime who worked on bipartisan legislation with Senator Amy Klobuchar … to create jobs.”

Though at odds over this, Raskin and Matthews have both conveyed concern over Trone’s plan to pour huge amounts of self-funding into the campaign.

Of Matthews, Susseles said, “She’s not running for Congress by herself or for herself.”

Trone responded by saying his wealth makes him “totally responsive to the customer, i.e. the voter.”

“You earn public office by your record,” he said, describing his own as creating 5,000 jobs by running a business in 21 states with excellent pay, health care and retirement benefits as well as other employee opportunities.