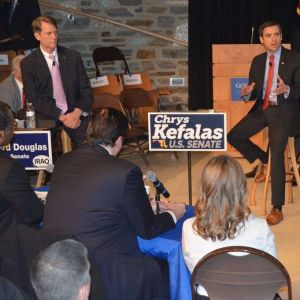 Four of the Republicans vying to be Maryland’s next U.S. senator introduced themselves to voters during a debate at Goucher College in Baltimore Thursday night. Their civil, conflict-free forum wasn’t broadcast on television or radio, but audio of the event was posted Friday by talk radio station WBAL, whose hosts Derek Hunter and Clarence M. Mitchell IV served as moderators.

The wide-ranging discussion yielded many similarities to be expected in a GOP primary — statements of fealty to gun rights, commitments to limit government and reduce public spending — but candidates Richard Douglas, Joe Hooe, Chrys Kefalas and Dave Wallace each sought to distinguish themselves just over two months before the April 26 primary. If nothing else, it was the beginning of a new phase in a race that’s generating optimism among Republicans hoping to build on Gov. Larry Hogan’s success.

Douglas, a former Pentagon official, Capitol Hill lawyer and Navy veteran, cast himself as best prepared to challenge the Democratic Senate nominee — either Rep. Chris Van Hollen or Rep. Donna Edwards — on world affairs. “They think foreign policy is reading talking points and a briefing book that somebody else wrote for you,” he said.

On economic development, Douglas talked about “supercharging” the Port of Baltimore. “I want to steal cargo from Norfolk, Savannah, Philadelphia and New York, and I want it to come here,” he said. “The way we do that is by improving the infrastructure in that port, modernizing everything we can modernize … to make Baltimore the Singapore of the Atlantic Coast.”

Hooe, owner of the Baltimore-based Tire Network, worked his experience as a business owner into a riff on reforming the federal Patent and Trademark Office. “There are thousands of startup entrepreneurs that are taken advantage of in America,” he said. “Big business swoops in right when they have this brilliant idea, and they hijack their trademarks and their intellectual property and make hundreds of millions of dollars.”

To illustrate this point, Hooe told his own David vs. Goliath story of going to court and defeating the multinational Goodyear Tire and Rubber Company, which essentially copied his signage and used a toll-free phone number nearly identical to his. As Baltimore Sun columnist Dan Rodricks detailed in 2012, Goodyear ended up pulling its signs and its number and paying Hooe legal fees.

Kefalas leaned on his biography most when making an argument for bringing back manufacturing. As vice president of the National Association of Manufacturers, he said he recently toured new facilities at the sportswear company Under Armour. “They’re ready to bring thousands of manufacturing jobs to Maryland if we get certain things under control,” he added, citing federal business taxes and regulations specifically.

Another piece of Kefalas’ resume got him in trouble with the crowd. There was booing and hissing when he touted his criminal justice work for Attorney General Eric Holder in the Obama administration, but the onetime legal counsel to Maryland’s former GOP governor Bob Ehrlich defended crossing the partisan divide.

“I am who I am, and I’m going to put it out there,” he said. “I do actually believe in decriminalization of drugs. Decriminalization is not legalization. … We need to move away from treating people who have an illness like they belong behind bars.”

Kefalas, 36, stood out in many ways, including as an openly gay Republican politician planning to get married after the election.

On stage with him Thursday, Wallace expressed disapproval of same-sex unions. “We’re going to go and make sure that we hold up the value of a marriage, which is between a man and a woman,” he said. “And then at the same time protect the religious rights of those people who decide not to participate in a gay marriage.”

Wallace was the 2014 GOP nominee for Maryland’s 8th congressional district, and he founded Chesapeake Kitchen Wholesalers as well as the conservative group Restore America’s Mission. He pledged Thursday to defund Planned Parenthood and spoke out against the Environmental Protection Agency.

“You get government out of the way,” he said early in the debate. “I’m going to be harping on this all night.”

On WBAL’s airwaves Friday afternoon, Hunter and Mitchell, who goes by “C4,” sang the candidates’ praises.

“I really believe that this race for Senate will be extremely close,” Mitchell said. “I don’t think it’s going to be a blowout like we’ve seen in the past.”

The only major candidates missing from the field at Goucher were Greg Holmes, who recently served as the Maryland Transit Administration’s director of governmental affairs, and Maryland House Minority Whip Kathy Szeliga. She’s seen as a leading contender, but missed the debate to attend a political fundraiser.