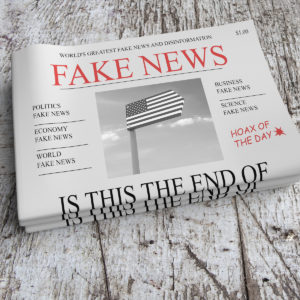 It started with a 139-word story about Kellyanne Conway’s visit last week to speak at a state Republican Party fundraising dinner. Although the event was closed to the press, an Associated Press freelance reporter managed to get in and the NHGOP is not too happy with her or her article, claiming the piece was biased and inaccurate. Now, the incident has spread to right-wing media outlets lambasting the “liberal mainstream media.”

Conway, counselor to President Donald Trump, was in Nashua on May 18 as the keynote speaker for the NHGOP’s Spring to Victory fundraiser. Members of the press were told ahead of time that it would be a closed event due to a “mutually agreed upon” decision by the White House and the state party.

Some reporters said they tried to get in to the Radisson Hotel to interview people outside of the room Conway was speaking in, but were told they were not allowed. For AP freelancer Melanie Plenda, she apparently walked in without much trouble.

“I was perfectly prepared, if anyone asked me who was I? Did I have a ticket? Anything like that, I was going to be honest,” Plenda told the New Hampshire Public Radio. “I was going to say no, I’m a reporter and could I speak with an organizer or I would like to get an interview with Ms. Conway. But no one did.”

Plenda said someone who appeared to be a guest invited her into the room, even after she said she didn’t have a ticket.

After the event was over, Plenda filed a four-paragraph story about the event that led with the statement that Conway told attendees to ignore Trump’s critics and the 150-person crowd was “largely friendly.”

“Some people in attendance withheld applause when Conway let loose with snarky comments about Democrat Hillary Clinton,” she wrote in the article.

After it was published, the NHGOP did not hold back from criticizing her for “sneaking” into their event and for misrepresenting the size of the crowd.

AP's @mcasey1 and @MelaniePlenda conspired 2 sneak into an event and lied about the attendance https://t.co/Zc86LDxjow #nhpolitics

“This is an absolute outrage,” said NHGOP spokesman Patrick Hynes to WMUR. “The crowd was wildly enthusiastic in support of Kellyanne Conway’s justified criticism of the atrocious Democratic nominee, Hillary Clinton.”

He said 430 people attended the event and her report was “grossly inaccurate”and “objectively wrong.”

The AP typically has a State House reporter in New Hampshire. Kathleen Ronayne was their reporter for the past few years, with several freelancers picking up work, but she left this month to run the State House bureau in California. It’s unclear if the AP has hired someone to take her place.

It didn’t stop there, though. The NHGOP blasted out an email on Monday using the incident as an attempt to raise funds for the state party.

“The reporter snuck into our event and misreported on it,” the email read. “She and the Democrats are peddling fake news! Her agenda is to discredit Republicans and we aren’t going to let her write our narrative!”

The email included a screenshot of Plenda’s Facebook post from November where she called for people to resist Trump’s presidency.

“There are a lot of us — roughly more than half to be exact — who said Trump’s vision of the future is not what we want our country to be,” the post reads. “We need to support the ACLU, we need to run for office, we need to oppose legislation that seeks to hurt and further marginalize, we need to join advocacy groups, we need to not be silent.”

Plenda said she regrets the Facebook post, which she has since deleted. She also concedes that she might have been wrong about the crowd size. However, she and the AP are standing by the legitimacy of the story.

“A freelancer covering the NHGOP fundraiser for AP was outside the event when she was invited in by a woman who appeared to be a part of the event,” the AP said in a statement. “AP stands by its reporting. AP standards require employees to refrain from sharing political views in any public forum.”

Due to NHGOP’s efforts to bring awareness to this controversy, it eventually was picked up by other right-wing media outlets, including The Washington Times and even Breitbart.

Plenda said she has now received several threats and emails, including one that said, “We know where you live.”

“Now they’re fundraising off of this, and it’s gone national, and it’s affecting me and my family,” Plenda said. “And I don’t think that is proportional to what they perceived happened.”

Hynes told NHPR that he called attention to the story because the AP at first refused to issue a correction. On Wednesday afternoon, the AP updated the story to indicate they reported the crowd size incorrectly. Breitbart wrote another longer article published Wednesday saying the AP is refusing to “publicly and transparently clarify that its freelance journalist Melanie Plenda did in fact engage in leftwing activism in violation of the newswire’s editorial standards.”

“We want the public to know that there is bad activist reporting happening in New Hampshire and will use all the channels that we can, all the channels we have at our disposal, to get the truth out,” he said.

With the NHGOP’s fundraising email claiming the story is fake news and the conservative national publications picking up the story, it’s becoming fodder for a GOP narrative that the press is biased and can’t be trusted.

A known right-wing blogger in the state dedicated an entire post to the controversy, claiming that the New Hampshire Democratic Party “conned” the reporter into writing a negative article about Trump.

“The reporter is an anti-Trumper who seems to have written that specifically for the Democrats so they could make false claims about the event and Trump’s support in New Hampshire,” the post read. “Because Democrats are trying to paint the picture that Trump is losing support and therefore Republicans are losing support. It appears they are lying, as usual. Rather than try to push their ideas of why they are a better choice than Republicans, they simply keep trying to paint a false picture of Trump and his supporters.”

Trump has criticized the mainstream media for months about being “unfair” and “biased.” It’s what he built his presidential campaign on and what his supporters believe.

According to Gallup, Republicans who say they have trust in the media has plummeted to 14 percent from 32 percent just a year ago. It’s the lowest confidence among Republicans in 20 years.