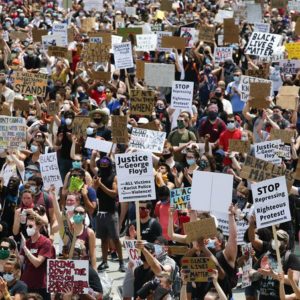 Media Gives Pass to Protests After Months of Lockdown Mania

“Public health,” America has learned, is more ideology than science.

Many of the officials who warned of dramatically dangerous consequences from porous coronavirus lockdowns were silent — if not supportive — when large protests began to be held in response to the death of George Floyd.

“Health risks that were intolerable,” the Competitive Enterprise Institute’s Joel Zinberg noted, became “manageable or immaterial in the service of a just cause.” Even Politico admitted that “stay at home, steer clear of friends and extended family, and absolutely avoid large gatherings” shifted to “[i]t’s time to get out of the house and join the mass protests against racism.”

It was hard not to notice, for example, when New York Gov. Andrew Cuomo was scolding New Yorkers for gathering at restaurants over the weekend, after praising them for gathering by the thousands for political protest just days earlier.

Less noticed has been the media’s mirroring of health officials’ startling turnabout. In the initial months of COVID-19, outlets eagerly reported individual stay-at-home order violations. But those same media outlets sang a different tune when protests and riots alike sprang up with coronavirus dictates still widely in place.

Exhibit A: The Los Angeles Times. On April 3, the largest-circulation newspaper not based in New York or Washington covered with approval the arrest of a lone paddle boarder off a local beach. Despite “beach advocacy groups” joining “the Coastal Commission in urging people to avoid crowding the beaches and ocean,” reporter Rosanna Xia lamented that it “hasn’t been easy keeping Californians” away from the water. Unsurprisingly, her article included no dissenting voices.

Weeks earlier, the Times editorial page had begun to issue regular jeremiads against protests by restriction resistors. The “outrage from some conservatives” concerned that “the government is overreacting and driving the U.S. economy into a ditch” amounted to “willful blindness or ignorance,” the paper thundered on March 17th.

A few weeks later, no worries over protesting. “Protesting injustice is your sacred right as an American,” according to an editorial in the June 2nd edition, which made no mention of social distancing or masks.

Vox — a website that “explains the news” via “journalists candidly shepherd[ing] audiences through politics and policy, business and pop culture, food, science, and everything else that matters” — once enthusiastically toed the lockdown line.

It pontificated about everything from the “poor reaction of a small segment of people to ever-stricter quarantine policies” (humans “are generally terrible at assessing risk,” a flaw that has “proven especially true in the case of the coronavirus”) to a Texas religious-liberty lawsuit that “places the public health of an entire community against the interests of a handful of pastors (and, potentially, parishioners) with an idiosyncratic view of the pandemic.”

When the Floyd protests and violence ramped up, Brian Resnick, Vox’s “science reporter” spoke to “several public health experts who support the protests.” He was told that “[p]rotesters are more afraid of doing nothing in the aftermath of George Floyd’s killing than the pandemic,” and “centuries of systemic racism, lifetimes of discrimination, and years of watching black people die needlessly drive those fears.”

Resnick concluded his piece with the stomach-churning whimper that “as a white man of some privilege, I feel it’s not for me to judge if the protests are worth it.”

At least taxpayers aren’t forced to pay for Vox’s hypocritical virtue signaling. That’s not true for National Public Radio (NPR), the taxpayer financed network with over 1,000 “Member Station signals broadcasting across the United States.” On May 7th, it conducted a puff interview with The Atlantic’s Amanda Mull, who penned the now-notorious “Georgia’s Experiment in Human Sacrifice.” (The piece hasn’t aged well.)

To its credit, NPR did cover concerns that “mass gatherings could add to COVID-19 cases.” Yet it also offered suggestions on “How To Stay Safe While Protesting.” (“Being outdoors seems to reduce the risk of exposure because the virus can’t survive long in sunlight and there’s better air circulation, but it’s no guarantee against infection. So, to reduce your own risk, it’s best to continue practicing social distancing and wear a face mask.”)

The helpful tips were provided on June 5th. NPR offered no such advice during the anti-lockdown protests of April and May.