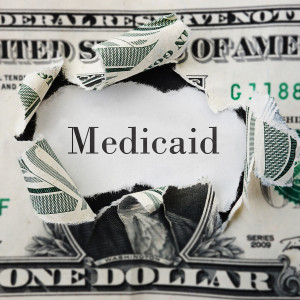 Every year, Medicaid loses more money to waste and fraud than the GDP of a small country.

That’s among the takeaways from a new report from the federal Centers for Medicare and Medicaid Services. The healthcare program for the poor made more than $86 billion in “improper payments” this year. That’s one-fifth of its total spending.

Much of that waste stems from payments made to cover the care of people who have enrolled in Medicaid but are actually ineligible. Worse, all that fraudulent spending doesn’t even improve the health of the program’s beneficiaries.

Medicaid was created more than a half-century ago to provide health coverage for low-income and disabled Americans as part of President Lyndon Johnson’s “Great Society.” The Affordable Care Act, which was signed into law on March 23, 2010, widened eligibility to include anyone with an income below 138 percent of the federal poverty level — about $17,600 for an individual. The law committed the federal government to covering 90 percent of the cost of care for these new beneficiaries in perpetuity.

In 2012, the U.S. Supreme Court gave states the right to opt out of Obamacare’s Medicaid expansion. Nevertheless, 38 states and the District of Columbia expanded their programs. As of this year, 12.4 million newly eligible Americans have enrolled in Medicaid, increasing total enrollment to about 70 million.

But there’s a problem. Millions of those enrollees are ineligible, according to Brian Blase, a former special assistant to President Trump for economic policy. In a 2019 paper, he estimated the number of improper enrollees in states that expanded Medicaid could reach 2.5 million.

The CMS report admits many states make no effort to verify whether enrollees are eligible for the program. “Insufficient documentation to affirmatively verify eligibility determinations” is a primary driver behind improper payments, the agency says.

All this waste is expensive. Medicaid eats up about one-quarter of state budgets, according to the Medicaid and CHIP Payment Access Commission. It’s the second-biggest line item for most states.

Yet we’re not getting much return on that huge investment. Patients covered by Medicaid tend to have worse health outcomes than those with private insurance. In a sample of more than 13,000 patients who underwent a coronary angioplasty, those with Medicaid coverage were more likely to have an adverse reaction such as a stroke or heart attack, according to a study published in the American Journal of Cardiology.

Another study from the Journal of Hospital Medicine found the mortality rate for pneumonia patients covered by Medicaid was nearly double that for people with private insurance. The study cited lack of funds, reduced access, and low-quality care as factors behind Medicaid’s poor outcomes.

In fact, people with Medicaid coverage often have worse health outcomes than those with no insurance at all. One study from the University of Virginia found that, for all patients, Medicaid coverage was associated with the longest hospital stays and highest in-hospital mortality — even compared to the uninsured. A two-year study of Oregon’s Medicaid enrollees found no improvement in health outcomes compared to those who lacked insurance.

A program that effectively lights one of every five dollars it spends on fire is a program that is not working. States and the federal government must crack down on this waste by ensuring that Medicaid enrolls only those who are truly eligible.