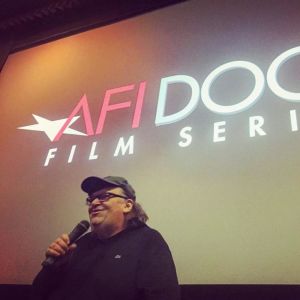 Michael Moore speaks during the American Film Institute's Nov. 16 screening of his latest documentary, "Where to Invade Next," in Washington, D.C. (Photo via Michael Moore on Facebook)
News

When it comes to Hillary Clinton, Michael Moore still has his doubts.

During Saturday’s Democratic presidential debate, the liberal documentary filmmaker tweeted, “I love Hillary. I do. But how can we vote for her? After what she did in taking us to war? Who doesn’t believe she’d do it again?”

The director seemed to be on an emotional roller coaster throughout the debate, praising Vermont Sen. Bernie Sanders while growing increasingly exasperated by Clinton’s lack of support for progressive causes — a $15 minimum wage, universal public college, and revived Glass-Steagall financial regulations. Moore hasn’t endorsed a primary candidate, but he was clearly upset with the likely Democratic nominee.

“You are better than this,” he tweeted of the former secretary of State, even as he called her “10,000% better than any Republican running.”

On Monday, the filmmaker brought his mixed feelings to Washington, appearing at an American Film Institute screening of his latest documentary, “Where to Invade Next.”

Speaking to an audience at Landmark’s E Street Cinema, he criticized Clinton for failing to say explicitly what his new movie argues — that the United States should adopt various social democratic policies from other countries.

Moore, who shot much of the new film in Europe — “It was a real joy to be around civilized people” — said he was particularly turned off when the Democratic front-runner rolled her eyes at Sanders for extolling Denmark: “They do a lot of great thinks in Denmark, and she’s appealing to the C+ students that George Bush was appealing to when she tries to de-intellectualize things.”

At the same time, Moore declined to reiterate his criticism of Clinton’s foreign policy. One of his big messages in “Where to Invade Next” is that countries typically are less militaristic — and better overall — with more women in political leadership. Asked if America would be less militaristic under Clinton, who voted for the 2003 Iraq War and is seen as a more hawkish Democrat, the filmmaker told InsideSources he “would like to believe so.”

“She’s not Margaret Thatcher, if that’s what you mean,” he said.

Part of why Moore may temper his criticism is that Clinton will almost certainly be the Democratic nominee — and he’s confident she can win a general election. In fact, the filmmaker told Monday’s crowd that any of the current Democratic candidates would win next fall.

Moore said he’s optimistic the Democratic Party ultimately will embrace many of the social programs he showcases in the film. He said many of his foreign interviewees didn’t understand why some Americans would want to “make themselves weak and make their people sick and keep them sick and keep them stupid and ignorant and uneducated and have a media that doesn’t help them at all learn what’s really going on around the world.”

“We’re like cutters,” Moore said. “Why would we be cutting ourselves over and over again?”

On the subject of last week’s terror attacks in Paris, the filmmaker warned against proposals to increase American military action in the Middle East.

“It’s our military action that has caused this calamity,” he said. “We unraveled the political and religious infrastructure of that part of the world, and created an even worse situation. Yes, they were bad guys, Saddam [Hussein] and [Muammar] Gaddafi, but one thing they got right was that you can’t allow these religious nutters to go at it against each other … The United States belongs in a ‘time out’ room when it comes to military activity. We should never be allowed, for some time to come, to involve ourselves, because we clearly don’t know what we’re doing.”