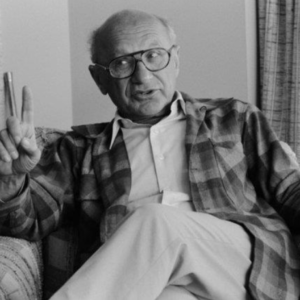 With laws expanding charter schools, vouchers, and education savings account on the rise at the state level around the country, Nobel-prize winning economist Milton Friedman’s writings on school choice are back in vogue. While Friedman’s vision of a regulated system of K-12 vouchers is widely cited from his seminal 1955 essay, “The Role of Government in Education,” few realize that half of the piece is devoted to another education policy proposal that has also been recently revived at the higher education level: income-sharing agreements as an alternative to student loans or government subsidies.

To frame his thinking, Friedman creates a distinction between the basic levels of education that create good citizens and positive externalities for society (what we now think of as the K-12 school system) and job-training that creates economic dividends for a specific worker (what he calls vocational education). While he argued that government has a role in financing the former type of education for everyone, he questioned whether it makes sense for the public to subsidize education that only benefits a single individual. Nevertheless, Friedman also argued that because of market inefficiencies, investments in human capital tend to lag behind investments in physical capital, and that a concerted public policy approach could be used to iron out the imbalance.

There are three ways that government can step in to encourage vocational education, according to Friedman. The first is to subsidize education, which government currently does through Pell Grants and other forms of low-interest loans. He argues that this approach is problematic because it creates perverse incentives that push students to pursue expensive degrees that the free market would not otherwise encourage them to pursue. (Arguably, the higher education “bubble,” that some argue is forming, is a result of these policies.)

The second option is to provide loans to prospective students from private lenders. He argues that this approach is problematic for a variety of reasons. These include a lack of collateral possessed by poorer students to hedge against the loans, and the wide range of salary outcomes that graduates enjoy—which would lead to high rates of default and would require high interest rates to support such a market.

In Friedman’s words: “Such an investment necessarily involves much risk. The average expected return might be high, but there is wide variation about the average.”

Friedman’s solution is a third way that has not been incorporated at scale to finance higher education. His solution was to encourage private entities, or more ideally the federal government, to buy “shares” in a student’s future earning potential. This way, students would receive the financial support to secure a vocational education, and would repay the balance they borrow based on how successful they are later in life. Under this model, a high-powered corporate lawyer would pay back far more than was given to them to pay law-school tuition, while a low-earning public defender may not pay back anything at all. The program would be designed so that the higher earners would offset the losses to the financing agency incurred by supporting the education of the lower-income earners.

While the idea has not found much purchase outside of some isolated private markets, (in part because public subsidies and loans have taken much of the oxygen out of the education-financing space) some schools are starting to experiment with the idea. Purdue University, for example, is piloting a program similar to the system envisioned by Friedman. As an alternative to offering students traditional loans, the school is creating repayment plans for loans that garnish a few percentage points off a graduate’s wages during the first 100 months they spend in the workforce after graduation. The program caps repayment for extremely high-earners, but not before the school can see returns of up to two and a half times the principal invested in a student.

Friedman envisioned the system as a more equitable and more efficient way to encourage investments in workers for the economy. He also noted the many problems the program could run into—i.e. the administrative costs of following up with students to make sure they repaid their loans and the difficulty of crafting fair repayment rates for students entering various professions. For these reasons, Friedman thought the program would be best run by the federal government, which he argued would be best positioned to keep track of workers moving across state and national boundaries. With advances in information technology that he could not have foreseen back in the 1950’s, however, it is possible that Friedman would have found a more decentralized approach to be more preferable in today’s world.

Financing higher education is emerging as a global challenge. Recycling this old idea, in which investments are made in a student’s potential, rather than opening up aid to all-comers, could be a way to keep higher education costs down without sacrificing the American values of free market principles and equal opportunity.