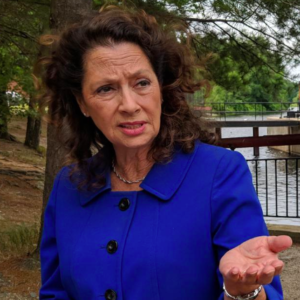 In a major reversal from her progressive campaign in the Democratic primary, Molly Kelly has announced she no longer supports repealing all of “Chris Sununu’s tax breaks to wealthy corporations,” as she described the policies.  Instead, she now wants to “keep the business enterprise tax cut in place.”

During her race against progressive Democrat Steve Marchand, Kelly regularly railed against this tax cut as part of Gov. Sununu’s “giveaways” to corporations and the wealthy:

“The Sununu tax breaks for wealthy corporations are not responsible, fair, or smart for our state’s future,” Molly Kelly’s campaign website says right now. She also frequently took to Twitter to make this case:

But in the newly-released candidate questionnaire for New Hampshire Business Review:

Q. Would you extend or pull back cuts in the business profits tax and business enterprise tax?

Molly Kelly: “While I would keep the business enterprise tax cut in place [emphasis added], I would repeal the business profits tax cut passed in 2017 that was largely a tax giveaway to the wealthiest corporations in New Hampshire.”

This is a significant flip-flop just weeks ahead of the election. Is it an indication that her progressive positions on the campaign trail were mere pandering to her party’s base?  Or has Molly Kelly has suddenly discovered what a boon this tax policy has been for New Hampshire:

For those keeping score, revenue from business taxes set a new record for state fiscal year 2018, which ended on June 30, despite two rounds of business tax cuts since 2015.

The past high-water mark for business taxes was at the end of fiscal year 2016, when the number hit nearly $700 million, with a nice bump in part from taxes the state collected when Planet Fitness issued its first public stock offering.

The 2018 number, aided by federal tax reform and the “repatriation” of corporate money previously held overseas, blew away all previous records with more than $774 million in the bank.

Either way, her pledge to reverse these “giveaways to wealthy corporations” were such a key part of her campaign. If she’s prepared to walk away from this promise, voters have to wonder: What’s next?