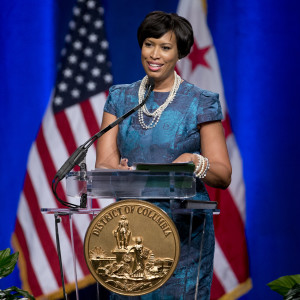 Early in her State of the District address on Tuesday, D.C. Mayor Muriel Bowser said the nation’s capital faces three choices on what amounts to the city’s central challenge.

After a decade of economic and population growth, with an influx of young white professionals displacing some of its historic black population, D.C. can “reject growth and watch our decline,” “grow without regard to our roots,” or pursue what the Democrat called “a third way.”

“We can balance change with preservation,” she told a crowd at the Arena Stage theater near the Southwest waterfront. “We can balance growth with a focus on our history.”

Bowser hasn’t suggested that her “third way” framing applies to other elements of her agenda, but the phrase does have a specific set of political implications in Washington. They may be useful in thinking about how the mayor positions herself in politics — and within her party — moving forward in her second year in office.

First and foremost, policy wonks will recognize Third Way as the name of a 10-year-old Democratic think tank, whose centrist members call themselves “passionately moderate on economic, energy, and education issues.” They’re not conservatives — certainly not at home in today’s Republican Party — but they reject Democrats’ most liberal impulses, casting themselves as “highly allergic to the orthodoxies of both the left and right.”

Their tradition was most embodied in American leadership during the 1990s, when President Bill Clinton and his “New Democrats” broke with liberal norms, reformed welfare and embraced what the New York Times called “pro-business pragmatism.”

Bowser may not fit perfectly into this mold. After all, she did use her speech to endorse a $15-an-hour minimum wage, undoubtedly delighting activists on the left and worrying many businesses.

But this type of move, following an enormous activist push, is the exception and not the rule for the mayor, whose instincts have never been those of the liberal vanguard. In fact, the former D.C. Council member “has been cautious,” reported Washingtonian in 2014, “and has rarely strayed from the safe middle ground.”

It’s also fair to call Bowser — who says, “We need a thriving private sector to put people on the path to opportunity” — a business booster.

In other words, she’s not New York City’s progressive firebrand of a leader, Bill de Blasio, nor is she “feeling the Bern” of socialist Democratic presidential candidate Bernie Sanders. She backs Hillary Clinton in the White House race, and certainly sounded like a Third Way Clintonian talking about work over welfare at Arena Stage.

People “left out of prosperity are not looking for a handout,” the mayor said. “They just want a shot, a chance, and they need help.”

The Washington Post interpreted this as a knock against an increasingly liberal D.C. Council and specifically its proposal “for paying suspected criminals to engage with mentors to turn their lives around.” Bowser favors putting resources into jobs programs.

Much has been made of the Council’s leftward shift, and what it means for a mayor who tends not to push the ideological envelope. Like her supporters on the Washington Post’s famously centrist editorial page, Bowser has been skeptical of a generous paid leave proposal authored by lawmakers — another boogeyman to business.

Her hesitance would definitely square with the posture of balance she’s trying to strike.

The Washington City Paper reported that Bowser telegraphed the legacy she’s aiming for at an off-the-record meeting of the Restaurant Association of Metropolitan Washington. Speaking Tuesday before her speech, she said she’d be the business mayor, the development mayor and “the people’s mayor.”

That’s at least a three-way approach, if not quite Third Way.