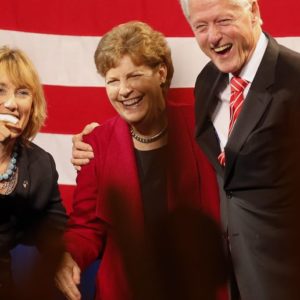 N.H. Democrats Have Their Own “Kavanaugh” Problems

New Hampshire Democrats want to take the fight over Kavanaugh to Gov. Chris Sununu and use it to undermine the popular incumbent’s re-election bid.  They’ve seized on the fact that Sununu signed a letter of endorsement for Judge Kavanaugh’s nomination to the SCOTUS over the summer.  But how far can Democrats go making the case that an allegation of sexual misconduct from decades ago should disqualify a candidate for high public office? 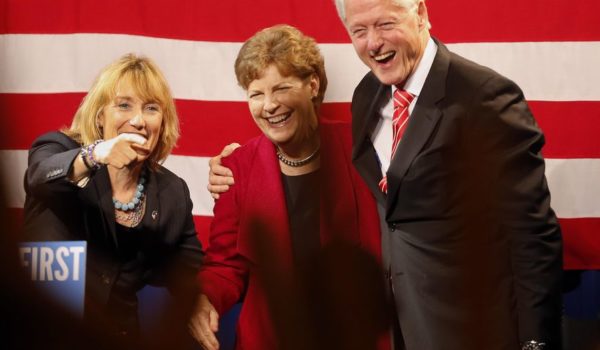 Consider the facts these women knew about Bill Clinton and his treatment of women as they stood on that stage. From Juanita Brodderick to Paula Jones to Monica Lewinsky, the former President’s behavior isn’t the subject of mere unsubstantiated allegations.  Are these New Hampshire Democrats prepared to wage war over whether Gov. Sununu and 31 other governors should have signed a letter endorsing Judge Brett Kavanaugh?

It wasn’t too long after the above photo was taken that the New Hampshire Democratic Party changed the name of their annual fundraising dinner from the Jefferson-Jackson Dinner to the Kennedy-Clinton Dinner. Less than three years later, sheer embarrassment forced the party to change it again—to the Eleanor Roosevelt dinner.

The “He Said, She Said” Kavanaugh saga is not good for Sununu or any Democrats (not to mention how awful it must be for Dr. Ford and Judge Kavanaugh.) .  The disturbing accusation laid out by Christine Blasey Ford is enough to turn anyone’s stomach. Whether her charges are real, fake, or a misfiring memory over 35 years resulting in mistaken identity—this conversation feeds the narrative that the party of Donald Trump is a party that’s not welcoming to women. And that hurts Republicans across the board, particularly in states like New Hampshire where Trump is already under water.

But what about Chris Sununu himself?  Did he make a mistake signing a letter of endorsement, and should he withdraw that endorsement now?

The head of the Democratic Governor’s Association, Washington’s Jay Inslee, was in New Hampshire over the weekend campaigning for Molly Kelly. “Gov. Sununu really ought to do the responsible thing and rescind his endorsement and we’ve called on him to do that.”  Kelly later said in an interview “Before there was even a vetting of Kavanaugh’s appointment, Chris Sununu signed a letter with 30 other Republicans supporting Kavanaugh’s appointment and my question would be, what was the rush?”

Actually, Judge Kavanaugh had been vetted by the FBI before.  Six times.  And thanks to the hyper-partisan politics during the W. Bush administration, Kavanaugh actually had to go through the hearing process to become a Circuit Court of Appeals judge twice.  Multiple vettings, decades of public service, 12 years on the Appeals Court bench…and not a hint of scandal.

Unlike, say, the current Democratic state senator from the North County, Jeff Woodburn, who is facing charges of sexual assault—not from the early days of the Reagan administration—but right now.  And how many days did Molly Kelly spend campaigning for his opponent?  When did she endorse the Democratic woman running against him as a write-in?  None, and never.

Meanwhile, Gov. Sununu says he stands by his endorsement of Kavanaugh…for now. “Any allegations of this nature must be taken seriously,” Sununu said Monday. “Of course we support him today but again, this is serious stuff and they have to do their homework at the Senate side. They’ll do what has to be done to figure out what the truth of the matter is.”

In other words, let the process continue. Which, interestingly, echoes the views of Sen. Susan Collins of Maine, who when asked “Do you believe Dr. Ford,” replied: “I don’t know enough about Dr. Ford and allegations to reach that kind of judgment. That’s why I want to have the opportunity to observe her being questioned, to read a transcript, read depositions—that’s so important.”

Then Sen. Collins added “Obviously, if Judge Kavaaugh lied about what happened, that would be disqualifying.”

This is the position, not just of Sen. Collins and Gov. Sununu, but most Republicans who’ve spoken out on the Kavanaugh case. And it’s a position only the most partisan voters would find disqualifying.

But even if there political hay to be made in New Hampshire from the Supreme Court battle in DC, are Democrats in a position to make it? Can the party that has repeatedly urged voters to look past personal scandals and focus on the competency of the candidate— from “It’s not Paula Jones, it’s the Dow Jones” in the 1990s to Hillary Clinton’s emails and FBI investigation in 2016— capitalize on Chris Sununu’s standard-issue endorsement of a GOP judicial appointment?

Perhaps someone can ask Alec Baldwin when he headlines the New Hampshire Democratic Party’s “Eleanor Roosevelt” Dinner next month.