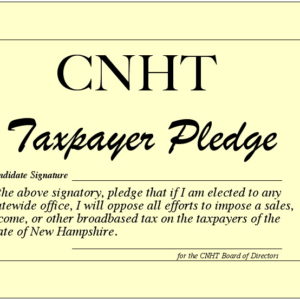 In N.H. Gov’s Race, Democratic Candidates Are 0-for-2 On “No New Tax” Pledge

At a candidate forum over the weekend, former Portsmouth Mayor Steve Marchand made it official: He will not sign “The Pledge“– a long-standing tradition in New Hampshire politics of promising to oppose a sales tax, an income tax or any broad-based tax increases here in New Hampshire.

According to a report in the Keene Sentinel:

In Marchand’s estimation, the pledge is an anachronism that prevents the state from looking for new sources of revenue and making much-needed investments in public education and infrastructure.

“We are becoming less entrepreneurial, and we are getting older,” he said, stressing the importance of retaining a strong, educated workforce in the Granite State.

Meanwhile, Marchand’s opponent Molly Kelly, told NH political reporter Paul Steinhauser in April that she was, in fact, going to take the pledge:

“The answer is NO,” Jane Aitken of the Coalition for New Hampshire Taxpayers told NHJournal via email. “We attempted to contact Kelly via numerous online methods as well as a letter mailed to her by the PO… and got no response. That was about two months ago. I personally sent the letter myself.”

And just to be sure their wasn’t any confusion, NHJournal reached out to Americans for Prosperity. They work with Americans for Tax Reform promoting a “taxpayer protection pledge” at the federal level.  Their state director, Greg Moore, says they haven’t gotten a signature from Molly Kelly, either.

Moore tweeted out: “So, we have one Dem candidate for #NHGOV (@NHMollyKelly) who says ‘everything is on the table’ when it comes to an income or sales tax and another (@marchandsteve) who attacks folks who oppose those taxes. Got it.”

Marchand says he’s not signing. Kelly says she is, but hasn’t yet.  Longtime New Hampshire politico Dave Carney says he understands her reluctance.  “In a primary, and with the Democratic base in the progressive mood it’s in right now, signing The Pledge might hurt her,” Carney told NHJournal. He also points out that only one gubernatorial candidate has won in the modern era without taking The Pledge–and that when two-term incumbent Democrat Jeanne Shaheen ran for her third term. (She signed The Pledge the previous two campaigns.)

Shaheen has already endorsed Molly Kelly in the Democratic gubernatorial primary over Marchand, as has most of New Hampshire’s Democratic Party establishment.

So which Shaheen will Kelly model herself after: 1.0 or 3.0?  New Hampshire voters are standing by to find out.