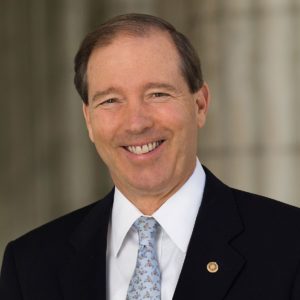 The two mass shootings in El Paso and Dayton, Ohio, last weekend have invigorated the U.S. congressional gun-control debate, with many Democrats calling for passage of increased background checks and pointing to the massacres as acts of domestic terrorism that must be quelled.

Several members of the New Mexico congressional delegation — all Democrats — say it is urgent for the Senate to act on House-passed gun-control legislation immediately, even if it means Congress is forced to cut short its summer recess.

“This may be a tipping point with these two shootings,” said Sen. Tom Udall, a sponsor of the Background Check Expansion Act, a companion to a House-passed bill that would demand federal background checks on all gun sales.

“We may — as a result of this and all the other shootings that have gone on — be able to get something done,” Udall said. “I think this is a gun epidemic. We can deal with it, with background checks, doing something about assault weapons, by being much more aggressive about who we let guns get in the hands of.”

“I know our country can and must do better than to keep allowing this hate-filled domestic terrorism to continue, he said. “It is impossible to ignore the impact of President Trump’s reckless and divisive language. This week, we saw firsthand how tragic it is when these disgusting views turn into violence against our communities.”

“In El Paso, the shooting was an act of domestic terrorism and white supremacy that enforced the need to take immediate action to end gun violence and root out hatred and bigotry,” he said. “White supremacy and gun violence should be treated as a national emergency — something that we can and must end.

“It’s clear we need courageous leaders in the White House and the Senate, who instead of stoking the flames of hatred, act to end these crises,” Luján told InsideSources in a statement. “I join the many calls for the Senate to end their summer recess, and pass comprehensive gun safety legislation.”

Rep. Xochitl Torres Small — whose district is across the state line from El Paso — tweeted the following:

“This weekend’s tragedies are too commonplace & we must honor the memory of the victims of both tragedies w/ action, not only thoughts & prayers. Time for the Senate to follow the House’s leadership & pass universal background checks. The safety of our communities depend on it.”

Rep. Deb Haaland issued a similar call on Twitter. “Our country needs solutions to end gun violence, which the House passed and the Senate must take up,” Haaland tweeted. “We must stop this hate epidemic.

Haaland also is taking issue with Trump’s comments regarding race and how she says they lead to acts of violence.

“I am appalled that our president has essentially [increased] his rhetoric spewing hate and bigotry all over the place against people of color. It incites anger and people believe that they have a right to go out and kill people,” Haaland said.

“You have my pledge that I will do everything I can to stop this violence and stop the hate.”

Republican Party Chairman Steve Pearce condemned the shootings, but added, “unenforceable gun bans and background checks for private sales is not the answer.”

“Mental illness is rampant in this country and continues to rise with the lack of accessibly and resources available to those who struggle with the disease,” Pearce told the Albuquerque Journal. “Gun-free zones won’t stop the mentally deranged from obtaining and using guns to carry out cold-blooded murder.

“Millions of law-abiding citizens responsibly use guns daily to protect themselves. There has to be a solution, but restricting the right to bear arms is not the answer.”

The House and Senate are both in recess through the end of August.

Meanwhile, Gov. Michelle Lujan Grisham said this week she will invite top state law enforcement officials and legislative leaders from both political parties to take part in a summit on domestic terrorism in Santa Fe this month.

“It is too easy for dangerous, violent and mentally ill individuals to obtain an instrument of mass death in this country, and hateful rhetoric can directly lead to destructive and heinous acts,” the governor said in a statement. “In New Mexico, we will be on the front foot, and I look forward to this discussion.”