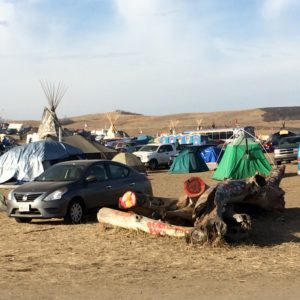 For months, activists protested to stop construction of the Dakota Access Pipeline. United under the slogan “Water is Life,” they engaged in increasingly provocative acts of civil disobedience, hoping to force the Army Corps of Engineers not to grant an easement allowing the project to drill under the Missouri River. For North Dakota officials, the worry isn’t pipeline leaks, but protesters’ abandoned gas tanks. Of particular concern is water contamination from abandoned cars, which could leak oil, gas, and other chemicals into the river.

“There’s a lot of cleanup going on, but it’s slow moving,” Lt. Tom Iverson of the North Dakota Highway Patrol said of the cleanup on a local radio show, “and it’s not going to be fast enough to be honest.”

It isn’t just the hundreds of tons of garbage. The protesters left behind several hundred vehicles.

“There are roughly 200 vehicles down there at last count, ranging from cars and pickups to rental trucks,” said George Kuntz, vice president of the North Dakota Towing Association

Each vehicle contains gas, engine oil, antifreeze and other chemicals classified as environmental hazards if they were to leech into the water. Now that warm weather has started to melt the record-breaking snowpack, water contamination from abandoned cars is becoming increasingly likely. Ironically, the two primary chemicals of concern are oil and gas.

“We can’t leave them there. We don’t know what kind of biohazard is going to be produced with all the fluids or any other garbage that’s inside the vehicle,” Kuntz continued.

Preventing water contamination from abandoned vehicles has proven easier said than done, however. The Army Corps of Engineers has instructed protesters to leave the area by February 22. Area officials are encouraging protesters to take their cars with them when they leave, but determining ownership of some of the abandoned cars has been difficult.

Under North Dakota law, owners must be given 90 days notice before a vehicle can be moved. This poses difficulties at the protest site, where ownership of many of the cars is unclear. Some are believed to be abandoned rental cars. Lawmakers are working to shorten the notification period to 30 days.

“There are definitely abandoned vehicles there, but the hard part is trying to determine the count,” said Rob Keller, public information officer for the Morton County Sheriff’s Department.

Even once a count is established, removal of the vehicles will be difficult. Warm weather has turned much of the camp site into a muddy mess. Some of the cars have sunk into the muck. Removing them may require heavy equipment to pull the cars to the roadway. This takes additional time, which the cleanup efforts are already running short of.

“We’re going to run 24 hours a day,” one towing company owner told the Western Wire. “Right now, time is against us.”

The water contamination from abandoned cars has been a concern for state officials for some time. Gov. Doug Burgum spoke of the coming problem in his State of the State address in January.

“Given the snowfall this winter and historic data on the Cannonball River, the camp will likely flood in early March,” Burgum said. “Vacating the unauthorized main camp on Army Corps land, cleaning up the abandoned cars, illegal structures and the human waste from months of occupation, will be a costly and time-consuming effort.”

Once the cars are removed, North Dakota will still have to address who will pay for their removal. The state is continuing to grapple with how to recoup some of the massive costs incurred by the protest camps. It is unlikely that the Standing Rock tribe will be able to offer much assistance.

Despite online campaigns that have raised millions for various protest groups, the tribe has lost millions because of the protests, which reduced earnings from its casino outside Cannon Ball. In 2015, the Prairie Knights casino took in about $14 million, but its 2016 earnings were only around $8 million. Already the tribe is worried that the shortfall will force it to cut essential services.