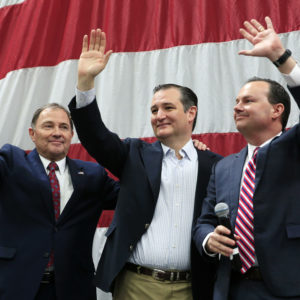 Posted to Technology May 02, 2017 by Giuseppe Macri

Senate Republicans have introduced a bill to permanently repeal net neutrality rules enacted during the Obama administration, one week after the Federal Communications Commission unveiled a plan to do the same.

The legislation, dubbed the Restoring Internet Freedom Act and introduced by Utah Republican Sen. Mike Lee, repeals the 2015 Open Internet Order in its entirety and bars the FCC from passing similar rules in the future.

Lee said the order, which prohibits internet service providers from blocking, throttling, or prioritizing web content for higher fees “would put federal bureaucrats in charge of engineering the internet’s infrastructure.”

“Few areas of our economy have been as dynamic and innovative as the internet,” Lee said Monday. “This is largely because the federal government has taken a hands-off approach that has allowed permissionless innovation to deliver unthinkable technological advances in such a short amount of time.”

Republican senators lined up to co-sponsor the bill, including Texas Sen. Ted Cruz, who famously dubbed net neutrality “Obamacare for the internet,” a claim he doubled down on Monday.

“Two and a half years ago, I said that net neutrality was ‘Obamacare for the internet,’” Cruz said. “At the time, the Obama administration, in its typically deceptive manner, had conflated net neutrality — a worthy idea, as originally defined, to protect an open internet — with reclassifying the internet as a public utility under Title II of the Communications Act of 1934, a burdensome, behemoth of a law that gives all sorts of authority to the government to regulate pricing and terms of service and stifle innovation online.”

The blunt repeal is less nuanced than the new Republican head of the FCC’s own proposal. Chairman Ajit Pai laid out a plan last week to repeal broadband’s Title II status, a classification that subjected ISPs to potential regulations like price setting and was used to dismantle the Bell telephone monopoly. Pai’s notice of proposed rulemaking (NPRM) would return ISP oversight to the Federal Trade Commission, where it resided since the Clinton administration, and seeks comment from the public on what to do with the rules against content blocking, throttling and paid prioritization.

The FCC engaged in a bit of PR for Pai’s plan Tuesday, blasting out a press release with quotes backing the plan from lawmakers including Senate Majority Leader Mitch McConnell, House Speaker Paul Ryan, and several sponsors of Lee’s bill, including Lee himself.

“President Obama’s net neutrality scheme is a threat to internet innovation and I commend Chairman Pai for taking this first step to removing the regulatory threat,” Lee is quoted in the release. McConnell commended Pai “for taking bold action…to turn back this portion of the Obama administration’s eight-year regulatory assault on all aspects of our economy,” while Ryan described it as “welcome news.”

“Congress is committed to working with the Trump administration to enact policies that protect consumers and ensure Americans have access to a free and open internet,” the speaker said.

“Once again, the extreme actions of some Republicans in Congress speak louder than their words,” Public Knowledge policy counsel Kate Forscey said. “This bill is just the latest in the ongoing assault on consumer protections we have seen in just a few short months.”

Forscey said the “polarizing” bill makes it impossible for Republicans to convince Democrats to work on a legislative compromise for net neutrality, a sentiment Democrats shared last week.

Pallone and other Democrats say they intend to mobilize the public outcry that followed congressional Republicans’ repeal of strong FCC privacy rules for internet providers to defend net neutrality.