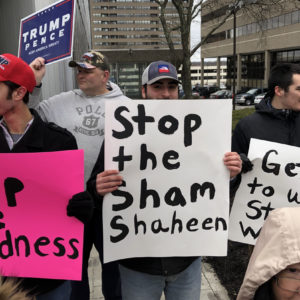 If the Democrats’ strategy is to use the impeachment trial to undermine Republican support for President Trump, it’s not working– at least not in the Granite State.

Trump lost New Hampshire to Hillary Clinton by less than 1 percent, and he’s consistently underperformed here compared to his polling nationwide. However, in the months since the impeachment inquiry was approved by House Democrats, Trump’s GOP support has solidified in the polls. In the latest University of New Hampshire survey, Trump’s approval among Republicans is an astonishing 90 percent.

Trump has announced he’s coming to Manchester on the eve of the First in the Nation primary for a rally of the Republican faithful — a blatant act of political trolling — and his Granite State fans are thrilled.

On Tuesday, several dozen Republicans gathered outside Democratic Sen. Jeanne Shaheen’s Manchester office to participate in what the Trump campaign has labeled “Stop the Madness” rallies. They demanded Shaheen abandon impeachment and vote to acquit the president (a highly unlikely outcome), and they received a steady stream of friendly honks and shouts from passing cars as they chanted and cheered. 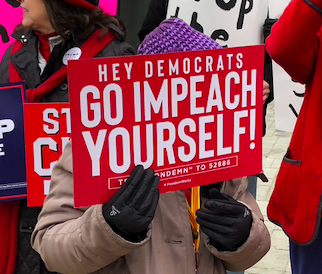 On hand was newly-elected Republican National Committeeman Chris Ager, who defeated a four-term incumbent — and less-than-Trump-friendly moderate– Steve Duprey for the job.

When asked about Trump’s poor poll numbers in New Hampshire, Ager insisted the president’s doing just fine “You have to take the polls with a grain of salt. A lot of Trump supporters don’t like to talk to pollsters or the press. I predict Trump is going to win New Hampshire and Republicans are going to sweep in November.”

Also in attendance: First CD Republican congressional candidate Matt Mowers, who tweeted: “Fired up crowd here in Manchester today that wants Chris Pappas and his friends on the left in Washington to end the impeachment circus. #NH01 is ready for four more years for @realDonaldTrump!”

Just two blocks away at Castro’s, a popular local cigar bar, Tom Clougherty of Hampton, N.H., said the impeachment issue is being overblown. “Nobody cares about impeachment. You see Alan Dershowitz? He pretty much put it to bed. Democrats just don’t want to admit it.”

However, Adam Smith of Bedford, N.H., said he was following the impeachment “as much as I can with a family and a fulltime job.” As for the seriousness of the impeachment charge, Smith rated it an eight on a scale of ten.

“Where there’s smoke, there’s fire,” he said. “You can have people deny things, but when you have witness after witness saying they were specifically told to do something and the only rebuttal is ‘No, I didn’t,” not everybody is lying, right?”