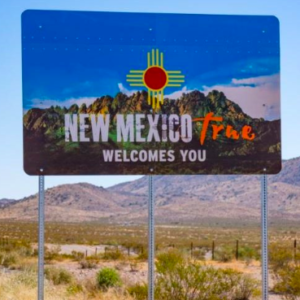 President Trump’s threat to impose tariffs on Mexico could result in a “catastrophic” economic blow to the state, New Mexico officials and business representatives say. They also believe Trump is wrong to tie immigration policy to trade, and fear companies across the state will suffer — with those near the border particularly affected.

“The president is threatening the employment of tens of thousands of New Mexicans whose livelihoods and families absolutely depend on a mutually beneficial relationship with our neighbors to the south,” New Mexico Gov. Michelle Lujan Grisham said in a statement. “These tariffs have the potential to be economically catastrophic. Our state sends almost $1.5 billion in exports to Mexico each year; a trade war would devastate businesses all across New Mexico, in rural and urban communities alike.”

Last week, Trump tweeted he would impose a five percent tariff on Mexican goods coming across the border beginning on June 10 unless Mexico helps limit illegal immigration. The tariff would increase each month until it reaches 25 percent in October.

“The problem is that Mexico is an ‘abuser’ of the United States, taking but never giving. It has been this way for decades. Either they stop the invasion of our Country by Drug Dealers, Cartels, Human Traffickers, Coyotes and Illegal Immigrants, which they can do very easily, or our many companies and jobs that have been foolishly allowed to move South of the Border, will be brought back into the United States through taxation (Tariffs),” Trump tweeted on June 2nd.

New Mexico’s closest contact with its southern neighbor is Santa Teresa. Santa Teresa, in Doña Ana County, is New Mexico’s busiest border crossing and accounts for about $2 billion in trade a year. The border economies are meshed in all types of businesses, including automobiles, electronics and produce.

“The tariffs are a very regressive tax on consumers and on New Mexico businesses. New Mexico is particularly exposed given a higher trade volume with Mexico relative to the average state,” Gaddy told InsideSources.

“If this goes into effect, the consequences will quickly be felt in the state from all different industries, he said. “Over the last 5-10 years the growth in cross-border trade with Mexico has been one of the few bright spots in the economy and all those gains will be at risk.”

Jerry Pacheco, CEO of the Santa Teresa-based Border Industrial Association, agreed that trade and immigration should not be intertwined.

“It’s incongruent to tie in trade to immigration — they are two separate issues and he [Trump] is trying to tie that in,” Pacheco said in a videotaped statement. “So what he has done, is he has made our industrial base in our region here the front line fodder, the cannon fodder, for this fight he is picking with Mexico.”

Mexico is America’s largest trading partner, and $346 billion in imports would be subject to tariffs if the president makes good on his threat. That would translate to higher prices for American consumers on products ranging from food to computers. The tariffs are expected to hit the auto industry especially hard.

The United States-Mexico-Canada Agreement, a replacement for NAFTA, has been one of the Trump administration’s most touted accomplishments.

“They are jeopardizing all of the work that can be done,” U.S. Rep. Ben Ray Luján said May 31 at an Albuquerque Chamber of Commerce Congressional Series Luncheon. “Whenever he believes there is a threat against him, he goes back to immigration.”

Upon the announcement of the new tariffs, Mexican President Andrés Manuel López Obrador dispatched his foreign relations secretary to Washington to try and negotiate a solution.

In a letter to Trump following the announcements of the tariffs, Obrador said that “social problems are not solved with duties or coercive measures.”