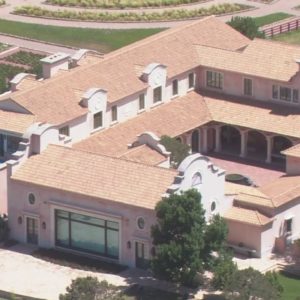 New Mexico officials are seizing control of state-owned land from the property of deceased sex offender and pedophile Jeffrey Epstein — land they believe he used to create a protective buffer while he and co-conspirators committed alleged sex crimes at his Zorro Ranch in Santa Fe County.

New Mexico State Land Commissioner Stephanie Garcia Richard said a letter canceling the state-property leases has been sent to Cypress Inc., a company owned by Epstein and listed as the owner of the ranch.

Garcia Richard said the state land was actually used to shield Epstein and others in his circle while committing salacious acts on the 8,000-acre luxury property. The land will now be confiscated and put to proper use.

“In our notification to Cypress, I’ve cited three reasons for canceling the grazing leases. First, the Ranch’s obstruction of my access to inspect state trust land. Second, a written misrepresentation by Cypress that does not comply with State Land Office leasing requirements. And finally, the attorney general has concluded that Cypress may have obtained the leases through illegitimate means for purposes other than ranching or agriculture,” Garcia Richard said.

Pursuant to Land Office statutes and rules, the notice triggers a 30-day time period before cancellation becomes effective on October 4, 2019.

“This land was no doubt used to protect the privacy of Epstein and his co-conspirators, and today we took steps to take back this public land,” Commissioner Garcia Richard said. “Moving forward, we will determine the best use of this land for the future.

“Some possibilities we are looking into include leasing the land to a New Mexico ranching family, opening up the petroglyphs on this land for recreation, and working with local organizations to install a memorial to survivors of trafficking, assault, and other sex crimes.”

The move follows a determination by state Attorney General Hector Balderas that the state-owned land on the wealthy financier’s luxury estate was not used for cattle grazing as claimed, but to provide increased privacy for alleged nefarious activities on his property.

“Having fully reviewed the referral from the State Land Commissioner in connection with my office’s investigation into criminal conduct related to Jeffrey Epstein in New Mexico, I am issuing a determination that the State Land Commissioner should immediately retake State trust lands and cancel leases that were improperly given to him,” Balderas said in a statement provided to InsideSources.

“The original leases to Epstein appear to have no beneficial use justification to the State, but rather appear to simply have been taken by him to increase privacy and the land mass surrounding his estate,” the attorney general said. “This sweetheart deal must be canceled and reassigned to a New Mexico ranching family.”

Epstein killed himself in prison last month while awaiting charges of sex trafficking. In late August, more than two dozen women described how Epstein abused them while they were either in their teens or pre-teens. Several lawsuits against his estate have been filed. One woman — identified only as “Jane Doe” — said she was abused at the Zorro Ranch when she was 14-years-old.

“What I remember most vividly was him explaining to me how beneficial the experience was for me and how much he was helping me to grow,” the victim said.

Garcia Richard said the allegations from women saying, “they were trafficked to the Zorro Ranch” is reason “to rip these leases in half and seize back this public land.”

The commissioner usually visits state-owned land without notifying the owner, but recently her office informed the Zorro Ranch that members of the State Land Office (SLO) would be arriving, she said.

Garcia Richard, drove to the ranch late last month with SLO colleagues on two occasions and tried to gain access, but the gate was locked and they were refused entry both times.

“It is heart-wrenching to know that state trust land was part of a broader scheme to cause harm to individuals.” Garcia Richard said. “So we want to do everything we can to make sure that our office is ready and available and helpful in bringing these folks to justice.”

Soon after Epstein’s arrest in New York in July, Balderas announced his office had opened its own investigation into the financier with plans to forward findings to federal authorities in New York, Inside Sources reported. The investigation continues.

In a letter to Garcia Richard at the end of last month, Balderas outlined his recommendations to cancel Zorro Ranch’s leases. He said his staff reviewed leasing documents Garcia Richard provided earlier that span decades. Numerous filings over the years, including one from 2016, said there were roughly 40 head of cattle at Zorro Ranch.

“Based on the materials provided, there appears to be no documentation reflecting that Epstein’s holding company, Cypress Inc., is primarily or otherwise in the business of ranching or animal husbandry; however, the original lease specifically stated that the land would be used for grazing,” Balderas wrote in his letter obtained by InsideSources.

“Your predecessor at the SLO should not have entered into these lease agreements. The SLO has a paramount duty to act in the best interests of the State,” he wrote. “With regards to agricultural leases, that means issuing leases only for legitimate purposes, like animal husbandry.”