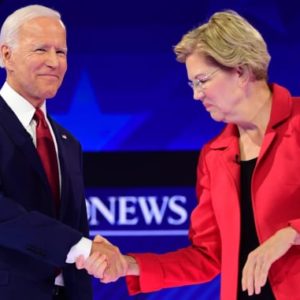 Posted to Politics October 02, 2019 by Michael Graham
The 2020 Democratic presidential primary in New Hampshire is a two-way race, according to the latest poll, and 2016’s winner doesn’t make the cut.
The new St. Anselm College poll puts Sen. Elizabeth Warren and former Vice President Joe Biden in a neck-and-neck race at 25 and 24 percent respectively, with the rest of the field a distant afterthought. Sen. Bernie Sanders, who won the state overwhelmingly in the last Democratic POTUS primary, barely registers in double-digits and is stuck in Buttigieg territory.

The rest of the field is mired in low single digits.

New Hampshire Institute of Politics Executive Director Neil Levesque summarized the results, saying, “With campaign season in full swing, the Saint Anselm College Survey Center’s fall poll of the New Hampshire Democratic Primary field shows Elizabeth Warren building on her momentum from the summer, while Kamala Harris and Andrew Yang have been unable to hold onto their July debate bounce.”

“There remain several months before New Hampshire Democrats cast their primary ballots, but Warren and Biden have clearly separated themselves from the rest of the field. If the dynamic of Warren as the candidate that best expresses Democratic voters’ policy preferences and Biden as the one who has the best chance of beating Trump sets in with voters, this is likely turning into a two-person race absent a big shake-up,” Levesque said.

While this poll is disappointing for the Sanders campaign, the biggest number of the week may be the $25 million he raised in the last quarter, by far the largest amount announced by any campaign.
“Bernie is proud to be the only candidate running to defeat Donald Trump who is 100 percent funded by grassroots donations – both in the primary and in the general,” his campaign manager Faiz Shakir said in a statement.