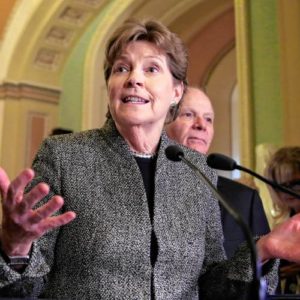 House Speaker Nancy Pelosi says she would be comfortable with Sen. Bernie Sanders at the top of the Democratic ticket this fall. Mike Bloomberg, who’s running against Sanders in the primary, has pledged to use the campaign he’s building today to back Bernie if the Vermont senator becomes the Democratic nominee.

But in New Hampshire, two prominent Democrats facing re-election this fall, Sen. Jeanne Shaheen and Rep. Chris Pappas, are refusing to answer the question: “Will you support Bernie Sanders if he’s your party’s nominee?” In fact, Pappas won’t even admit which candidate he voted for in the New Hampshire primary.

They are hardly alone. New Hampshire Sen. Maggie Hassan has also repeatedly refused to answer the question as well, and Sen. Kyrsten Sinema, a Democrat in red-leaning Arizona, dodged the ‘Bernie’ question.  “We’re not talking about 2020,” said an aide when reporters pressed Sinema on the issue.

As the Democratic establishment began wringing their hands over Sanders’ success in the days leading up to the First in the Nation primary, Sens. Shaheen and Hassan and Rep. Pappas were oddly silent, declining to endorse any candidate in the race. And after teasing the notion that he might “selfie” his vote (“I’ve been toying with the idea, do I do a ballot selfie and just sort of say, “Hey, you know, this is who I’m supporting.”), Pappas is now refusing to even acknowledge who he voted for.

“Because Bernie Sanders is a disaster, but the grassroots activists love him,” one NH Democratic insider who supported a different candidate told NHJournal. “After watching Sanders defending Castro and praising socialism, I can’t imagine [seeing] Shaheen standing next to him at a campaign rally in Manchester.”

Other New Hampshire Democrats are prepared to make the commitment Shaheen and Pappas haven’t.

“I’m going to support the Democratic nominee whoever it is, because I believe our nominee is going to be better than what we have in the White House today,” State Sen. Lou D’Allesandro told NHJournal. However, he also added he didn’t believe it would be Bernie Sanders.

“I think we’re going to have a brokered convention, and I hope the Democrats turn to a person who can beat Trump.”

Shaheen’s had a problematic relationship with Sanders for years. In 2016, she was a superdelegate to the Democratic National Convention and cast her vote for Hillary Clinton — despite the fact that Sanders won the state by 22 points. Progressives publicly urged her to vote with the majority of her constituents, but she declined.

“You need to start asking him questions about his plans and his background,” Shaheen said of Sanders during the 2016 primary. “Ask how he’s going to address foreign policy and national security, how he’s going to pay for his higher education and healthcare proposals. There are a lot of unanswered questions.”

A year later, however, Shaheen was one of 16 U.S. Senators who signed onto that “healthcare proposal,” despite the unanswered questions. “Too many Granite Staters continue to struggle to access quality affordable health care,” she said of her endorsement of Sanders’ Medicare for All plan.

But as of 2020, she has flipped again, rejecting Medicare for All as the November election approaches.

“I’m going to continue to argue that we should build on the Affordable Care Act,” she said. “We should not overturn it and totally change our system again and start from scratch,” Shaheen said earlier this month.

Granite State Republicans are reveling in the Democrats’ discomfort. “It’s ridiculous that Democrats are dividing themselves on stage tonight, and yet DNC superdelegates Chris Pappas, Maggie Hassan and Jeanne Shaheen won’t tell their party who they supported in the #FITN primary two weeks ago,” the NHGOP tweeted during Tuesday night’s Democratic debate.

At the same time, NHGOP state chairman Steve Stepanek believes Shaheen, Hassan and Pappas will fall in line behind Sanders if and when the time comes, and he points to his own party’s experience as an example. “Look at 2016. Senator Kelly Ayotte refused to support the GOP nominee, and they both lost by a mere fraction here in New Hampshire. It was a mistake.”

“I don’t see Jeanne Shaheen and Chris Pappas making that same mistake in 2020.”

But what does supporting a candidate like Sanders, viewed by many Granite Staters as radical, do to Shaheen and Pappas’ prospects in the general election? It’s likely to have an impact on the electorate, says UNH political science professor Dante Scala.

“The key area to watch in New Hampshire will be prosperous towns in Hillsborough and Rockingham counties – areas where Pete Buttigieg and Amy Klobuchar did very well in the primary, and Bernie Sanders did worse than he did statewide. The key voting group in these towns will be moderate, well-educated, prosperous Democrats.”

Others see more danger ahead. “A Bernie nomination probably means they both lose,” one longtime NH Democratic insider said of Pappas and Shaheen.

Sen. D’Allesandro wouldn’t go that far, but he’s not happy, either. “If Bernie’s the nominee, New Hampshire Democrats are in real trouble.”