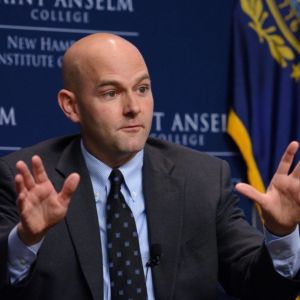 Three months into Republican Gov. Chris Sununu’s term it already looks like he’s got a couple challengers in 2018. The first to announce in March was Jilletta Jarvis for the Libertarian ticket. Now, Steve Marchand, former Democratic mayor of Portsmouth is throwing his hat into the ring too.

Do these names sound familiar? Well, they both ran for governor in 2016. Jarvis was an Independent and Marchand came in second in the Democratic gubernatorial primary, finishing behind eventual nominee Colin Van Ostern.

“We can make New Hampshire the best place in America to start and raise a family, and the best place to start and grow a business,” Marchand wrote in a Monday email to supporters. “We will aspire to be the example of what America, at our best, can be. That’s why I’m running for governor.”

Last year, Marchand trailed behind his Democratic challengers in campaign fundraising and the polls, often coming in behind businessman Mark Connolly and Van Ostern, the former executive councilor. However, he managed a surprising second place finish, garnering 25 percent of the vote. Van Ostern received about 52 percent and Connolly took 20 percent.

On a Tuesday press call, Marchand chalked up his difficulty in fundraising to his timing and to entering the race late, but told reporters he enjoyed the experience.

“Keep in mind, last year, I got to second place in our primary despite very little time and consequently very little money,” he said.

Now, he’s not going to make the mistake of entering late again, and while it is definitely early to announce a run for the Corner Office in 2018 (more than a year-and-a-half out), Marchand said he couldn’t sit idly by under the leadership of President Donald Trump and Sununu.

“I realized there was an unprecedented passion unprecedented due to a lot of circumstances at the state and national level,” he said. “These are unusual times.”

Marchand has been quietly campaigning for the past few months, attending various Democratic meetings and doing meet-and-greets with his base. Already, he’s criticizing Trump’s and Sununu’s agendas. He pointed to Sununu’s first bill signing, which repealed required permits for concealed weapons.

“That’s not the direction we need to go in as a state,” he said. He also accused Sunnunu of wanting to weaken unions, suppress voter turnout, and privatize public education.

So what makes this campaign different than his last one?

Marchand only raised about $30,000 during his campaign last year, according to campaign filings with the secretary of state’s office. Van Ostern raised $1.1 million in just the primary election.

Daggers even wrote a blog post on his company’s website discussing the importance of early campaign fundraising.

“An early fundraising start will give the opportunity to build a solid infrastructure, allow the candidate more time to campaign, and most importantly give you the greatest chance at victory,” he wrote in 2013.

If Marchand can drum up a solid war chest before other candidates jump into the race, he could be a serious contender before he actually starts spending any of it.

Don’t expect too many changes in his platform, though. Marchand still supports legalizing and taxing marijuana and increasing the state’s business profits tax, which would supply millions of dollars to support state aid for full-day kindergarten and improve the state’s infrastructure, among other policies.

Yet, his record is already being criticized by the Republican Governors Association.

“From property taxes, to the gas tax, to the business profits tax cut, Marchand has consistently supported increasing the tax burden on New Hampshire families,” the group said in a statement. “While Steve Marchand may claim to be the most fiscally responsible candidate for governor, his campaign won’t be able to rewrite his record of supporting higher taxation on Granite State voters.”

Besides entering the race early, Marchand said he’s more committed to expanding his “knowledge base” and getting out to interact with voters on a grassroots level statewide.

“The more you go out and speak to groups and to people, the more you learn,” he said.

With this early momentum, Marchand also seeks to improve upon some mistakes his Democratic challenger made in the general election.

Van Ostern’s biggest struggle in his race was name recognition. A poll before the election found that only 10 percent of respondents did not recognize Sununu’s name, but about 28 percent never heard of Van Ostern. While Van Ostern benefited from a strong ground game from the New Hampshire Democratic Party and a bigger war chest than Sununu, the voters didn’t turn out for the Democratic nominee like they did at the top of the ticket.

By getting out of the gate early and meeting with voters now, Marchand is increasing his chances that come Election Day next year, the voters will remember who he is.

Yet, Democratic voters might also recognize Connolly’s name on the ballot. The former gubernatorial candidate is also mulling another run. He stirred some intrigue when he had a paid “sponsored post” on Facebook last week.

Connolly said Marchand’s announcement was too soon and that now is the “time to governor” and the “focus should be on the budget.”

“We should be working with our leadership in the Senate and House to get our best possible budget for the state,” he told NH1 News. “After the budget plays out… I’ll consider running again if the ideas I offered in 2016 aren’t being fully addressed. But certainly at this stage you don’t say if you’re in or you’re out.”

Marchand’s focus is on Trump and Sununu. He believes Sununu’s “full-throated” support for Trump during the campaign and still in his term, will ultimately be his downfall.

“It’s never too early to begin what’s going to be a long and difficult process,” he said. “It is difficult to defeat a first-term incumbent governor. I’m under no illusions. I will be a happy warrior. I will not be outworked. I know the magnitude it will take.”