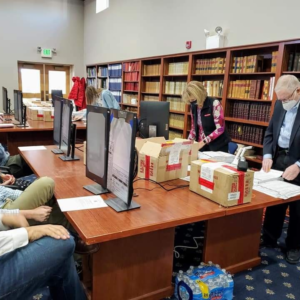 New Hampshire’s election recount season is in full swing, with Tuesday concluding the second day of requested recounts. Thus far, no changes have been made in results.

The Senate now officially has a GOP majority with at least 13 seats, with the final recount Wednesday for Senate District 12.  Kevin Avard (R-Nashua) is leading Senator Melanie Levesque (D-Brookline) by more than 800 votes. If the results hold, Avard will cement a 14-10 GOP majority for the next two years in the upper chamber.

Update: In Merrimack House District 17, Dennis Soucy (R-Concord) requested a recount after falling 193 votes short on election day. After hand recounting, both candidates picked up seven votes apiece. Rep. Sofia Wazir (D-Concord) will keep her seat for the ’21-’22 session with a final margin of 193 votes.

In most recounts, ballots are counted that machines missed – ballots on which voters placed an ‘X’ over the circle, used another marking style, or circled the names of their preferred candidates. The machines, which are very reliable in New Hampshire, miss these un-ordinary markings.

Daniels picked up 36 new votes and Chandley picked up 75, but the final result remained the same.

Nashua’s Ward 7 recount results did not change either, with Charlie Hall (R-Nashua) only gaining 3 on Melbourne Moran Jr. (D-Nashua.) Moran Jr. was victorious by 18 votes on the final tally for the third State Rep. seat in that district 1,805 to 1,787.

The remaining recounts are, as scheduled: