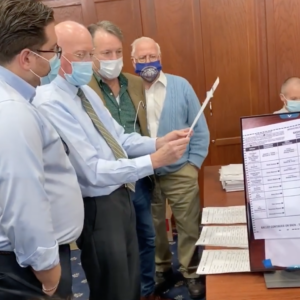 It’s official: the GOP will hold a 14-10 majority on the state Senate and Sen. Chuck Morse (R-Salem) will once again be Senate President.

Avard prevailed 17,534 to 16,729 after both gained 57 votes in the process leaving the margin unchanged.

State Representative Joshua Adjutant (D-Bridgewater) fended off a recount challenge from Kendall Hughes (R-Grafton) for the seat representing Merrimack County District 17, leaving the current House makeup at 213 GOP – 187 Dem, with 9 recounts to go. The final numbers will be updated here on Thursday morning after the Secretary of State’s office updates the totals online.

In Merrimack House District 17, Dennis Soucy (R-Concord) requested a recount after falling 193 votes short on election day. After hand recounting, both candidates picked up seven votes apiece. Rep. Sofia Wazir (D-Concord) will keep her seat for the ’21-’22 session with a final margin of 193 votes, 1209 to 1016.

In most recounts, ballots are counted that machines missed – ballots on which voters placed an ‘X’ over the circle, used another marking style, or circled the names of their preferred candidates. The machines, which are very reliable in New Hampshire, miss these un-ordinary markings.

Daniels picked up 36 new votes and Chandley picked up 75, but the final result remained the same.

Nashua’s Ward 7 recount results did not change either, with Charlie Hall (R-Nashua) only gaining 3 on Melbourne Moran Jr. (D-Nashua.) Moran Jr. was victorious by 18 votes on the final tally for the third State Rep. seat in that district 1,805 to 1,787.

The remaining recounts are, as scheduled: