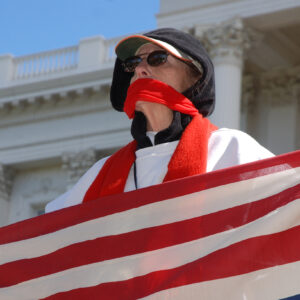 Can Americans be protesters and patriots at the same time?

On Saturday — the Fourth of July — millions of Americans will unfurl the Stars and Stripes at a time when many of their fellow citizens are refusing to stand in its honor, instead taking a knee to protest “the Republic for which it stands.”

A handful of New Hampshire Democratic state reps answered that question by refusing to stand for the national anthem at the beginning of the June 30 final session of the House. Among them were Reps. Timothy Horrigan (Durham), Catherine Sofikitis (Nashua) and Wendy Thomas (Merrimack).

“It’s the first time I’ve ever knelt rather than stand for the anthem, and I did so because things are at a bubbling point in America,” Rep. Thomas told NHJournal. “I knelt for Black Lives Matter, but I also knelt because of news that Trump is OK with Russia putting bounties on our soldiers’ heads, and because we’re losing lives to coronavirus daily. I was sending a message — America is in trouble.”

The Associated Press distributed a photo on the national wires of Thomas kneeling. She told NHJournal she received so much feedback that she wrote a message in response.

“This morning, this photo ran in an AP article that has apparently been published around the nation,” her statement reads in part. “I am proud of my stance and I intend to frame this photo. ‘Hey kids, take a look, if your mom can send a statement, then you can too.’” 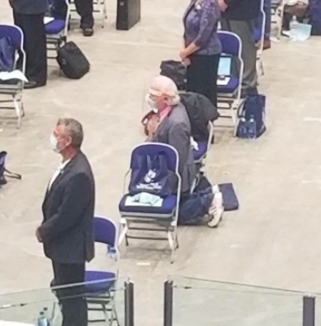 Rep. Timothy Horrigan (D-Durham) kneels during the national anthem at the opening of the NH House of Representatives on June 30, 2020.

Rep. Horrigan would not discuss his motives, simply telling NHJournal, “I stood for the pledge, but decided to kneel during the anthem. That’s all I have to say about it.”

And during an Executive Council meeting in May, Democrat Deb Pignatelli concluded her recitation of the Pledge of Allegiance with “and justice for some.”

“We don’t treat people equally in this country, and the COVID-19 crisis has shone a bright light on those differences. I think we have a way to go and a lot of work to do until we’re a country ‘with liberty and justice for all,’” Pignatelli said at the time.

Some say the demonstrations, often led by Black Lives Matter, are their own form of patriotism. Protesting has a long history of bringing about social change.

Others see statues of America’s Founders falling and say the protesters are radicals trying to destroy their country.

According to the latest Gallup Poll on national pride, patriotism appears to be on the wane. The number of Americans who say they are “extremely” or “very proud” to be Americans is the lowest since Gallup began asking the question in 2001. While two-thirds of Republicans say they are extremely proud, just 24 percent of Democrats agree.

“Few Americans who travel internationally come back to America without a greater appreciation of just how good this country is, how important our freedoms are — and how rare they are,” Sununu said.

“When we talk about the free world, we’re the freest of the free world. We create an opportunity where anyone can, can put forth the best of themselves and create success for themselves, their family, and their community.”

“That’s something to be celebrated,” Sununu said.

Joanna Kelley, a Portsmouth business owner and activist in the African-American community, isn’t sure she agrees. Asked if she celebrates the Fourth of July, Kelley replied: “Well, I don’t like my stepfather, but I still go to his birthday party.”

“This is where it gets problematic,” Kelley told NHJournal. “If I criticize something, I’m labeled ‘anti-American.’ The fact is America has done a lot of things well, and a lot of things not as well.

“That’s why it’s so important to have Juneteenth as a holiday, to help remember the entire story,” Kelley said.

David Canton, an associate professor of history and director of the Africana Studies Program at Connecticut College, has strong views about patriotism and the legitimacy of Black Lives Matter.

“A patriot is an engaged and informed citizen, who’s a critical thinker, open to other perspectives, non-judgmental,” Canton told InsideSources. “In other words, your patriotism is geared by ideas — ideas and information — and not rooted in jingo, not rooted in feelings, of flags, fireworks, names.”

“Oh, without a doubt. If you look at the history of democracy, African Americans are the foundation of making this country close to democracy — if you look at the Civil War, the civil rights movement, Black Lives Matter, etc.,” he said.