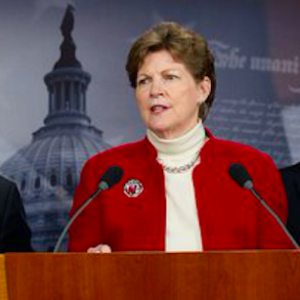 On the same day jobless claims from the coronavirus shutdown hit an astonishing 22 million, Democrats in Washington, D.C., allowed a federal relief fund to run out of money.

As a result, thousands of New Hampshire businesses are left hanging, while the state’s all-Democratic congressional delegation refuses to break partisan ranks.

Thursday morning, the Small Business Administration (SBA) announced it “is unable to accept new applications” for the Paycheck Protection Program after running out of the appropriations approved by Congress just two weeks ago.

A key piece of the $2 trillion CARES Act, the $350 billion Paycheck Protection Program (PPP) is designed to give small businesses a lifeline while being shut down to slow the spread of COVID-19. If businesses use the funds to keep their payrolls intact through the lockdown,  the loans will be forgiven.

Sen. Mitch McConnell and the GOP majority have been trying for a week to get more money into the PPP fund, but as CBS reported on April 6: “Senate Democrats block $250 billion expansion of small business loan program.”

Bruce Berke, New Hampshire director of the National Federation of Independent Businesses, told NHJournal: “Congress needs to get their focus back on their constituents and pass the supplemental funding for PPP. Leave the legislative specials for debate on another day, another time. The survival of many, many small businesses is at stake.”

While Gov. Chris Sununu and the New Hampshire Bankers Association said they would try to keep some aid coming to Granite State small businesses, there is no substitute for federal funding. And New Hampshire certainly needs it.

According to a recently released survey from WalletHub, New Hampshire saw a nearly 5,000 percent increase in year-to-year unemployment claims, the sixth-highest increase in the nation.

Struggling businesses have flooded the SBA with loan applications, prompting warnings a week ago that the fund would soon run dry. When Democrats continued to oppose a “clean” unanimous consent vote to approve funding, Republicans called them out.

At least two Democratic senators, Kyrsten Sinema of Arizona and Tina Smith of Minnesota, broke with their party’s leaders and urged the Senate to approve additional funding by unanimous consent. But not one of New Hampshire’s D.C. Democrats have done the same. Instead, Sen. Jeanne Shaheen is making additional demands before she’ll support releasing the desperately needed funds.

Because Congress failed to replenish the PPP loan program, locked-down New Hampshire businesses are now locked out. New Hampshire banks are trying to make up for the freeze.

“Banks in New Hampshire have been assisting their customers aggressively since families and small businesses were first impacted by the coronavirus. Banks have been eager partners in implementing PPP and providing hundreds of millions of dollars in forgivable loans to support the payrolls, rent and utilities of small businesses here,” said Kristy Merrill, president of the New Hampshire Bankers Association. “Banks were a key source of financial assistance for small businesses prior to the program’s existence and banks will continue to be there to support Granite Staters, although federal PPP funds have run out.”

Sununu has worked hard to maintain bipartisan cooperation during the coronavirus crisis and declined to criticize the N.H. delegation over its silence. “I think the delegation has been doing a good job advocating for funds to come in here with the PPP program,” Sununu said in response to a question from NHJournal.

Meanwhile, his fellow Granite State Republicans haven’t been so kind. They’re making the case that Democratic obstructionism led to small businesses being left out in the cold.

“While our 603 community is coming together to support small businesses and families in need, Chris Pappas and Nancy Pelosi are hell-bent on using this crisis to advance their left-wing agenda,” Mowers said. “Because of their callousness, come November, Pelosi and Pappas will know what it’s like to receive a pink slip, too.”

“Our economy is in trouble, and our businesses need help. Thankfully, our President is providing leadership, but the Democrats in Washington are still more focused on keeping the lobbyists and special interest groups that fund their campaigns happy instead of helping their constituents,” Mayberry said. “Pelosi’s obstruction is unconscionable and Chris Pappas’s silence is deafening.”

“How does Jeanne Shaheen dare to take credit for delivering emergency funds to those in need? Her filibuster delayed the CARES Act, and now her obstructionism has let a vital small business loan program run out of funds,” Bolduc said. “Shaheen needs to stand up for New Hampshire, not her D.C. posse.”

“D.C. Jeanne is taking her cue from Nancy Pelosi and her most liberal Senate colleagues, abandoning Granite Staters’ best interests to kowtow to the progressive agenda and special interests,” Messner said.

“Why not pass this bill immediately, and then negotiate the other points? Do they not understand that there’s no time to waste in getting these funds to businesses?

“Once again, Senator Shaheen takes the bows when she comes to New Hampshire for her ‘leadership,’ but when she’s in Washington, she dives into the partisan politics pool and forgets about Granite Staters and their needs.”