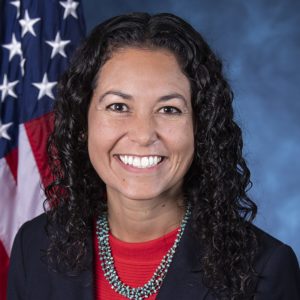 Editor’s note: This story has been updated.

A legal dispute over protecting a species of spotted owl has stopped all timber management on New Mexico’s national forests — including fuelwood collection — and now New Mexico’s Congressional Delegation has called on the U.S. Forest Service to immediately resolve the issue.

Sens. Tom Udall and Martin Heinrich, and Reps. Ben Ray Luján, Deb Haaland and Xochitl Torres Small wrote to U.S. Forest Service Chief Vicki Christiansen last week. “We strongly encourage the Forest Service and other parties to the lawsuit to work quickly to respond to the ruling and resolve a variety of issues, including, but not limited to, traditional firewood gathering, tribal cultural activities, and forest restoration and fire mitigation projects,” the lawmakers wrote.

“We likewise strongly urge the Forest Service to undertake the action necessary to comply with the Endangered Species Act to allow the resumption of forest activities and minimize impacts to traditional uses and projects that improve the long-term health of the forest.”

The letter was in response to a lawsuit with the District Court of Arizona filed by WildEarth Guardians — a national environmental group with offices in New Mexico — which contends the U.S. Forest Service and Fish and Wildlife Service have not adequately monitored populations of the Mexican Spotted Owl as required under the Endangered Species Act.

“This decision is about agency accountability, to the public and to the recovery of the Mexican Spotted Owl,” said John Horning, executive director of WildEarth Guardians, at the time the lawsuit was filed. “With this decision, the agencies will finally be held accountable for ensuring that all forest management practices help, not hinder, owl recovery.”

The group, however, has responded to the statewide reaction by asking the court to exclude cutting and collection of firewood from the list of prohibited timber management activities. It is not clear when the judge will act on the original motion.

In response to an article on the ban in the Taos News, area resident John D. Lapin made the following comment:

“This is not good. Can someone explain why people cutting standing dead trees in Carson Forest endangers the spotted owl?” he asked. “I have been cutting dead trees for 20 years in Northern New Mexico and never seen an owl.”

Laura McCarthy, state forester with the New Mexico State Forestry Division, said there are alternatives for those seeking fuelwood.

“This court ruling is causing confusion and concern for many New Mexicans who rely on timber from our National Forests for firewood to heat their homes in the fall and winter,” she said in a news release. “While State Forestry does not have jurisdiction over National Forest System Lands managed by the USDA [U.S. Department of Agriculture] Forest Service, we can offer options and will do everything we can to help until there is a resolution.”

Wendy Mason, spokeswoman for the state’s Energy, Minerals and Natural Resources Department, concurred, saying it is imperative that New Mexicans have access to fuelwood as soon as possible.

“It is important for New Mexicans to be able to access fuelwood, especially those who live in higher elevations where it is obviously going to get much colder as we move into fall and of course winter,” Mason told InsideSources. “We hope that the issue will be resolved quickly and we know our partners with the U.S. Forest Service are working hard to try and get that accomplished.”

New Mexicans can contact any State Forestry District office or log onto NMForestry.com for detailed information on where they can get fuelwood permits, the Forest Service said.

The Bureau of Land Management is selling fuelwood permits for personal use, after noting the ban has resulted in an increased request for firewood. BLM permits are valid for cutting only dead (down or standing) piñon and juniper (cedar) trees.

Cutting green trees or other trees not allowed by permit is strictly prohibited, according to the BLM. Rules, regulations and timing vary slightly between field offices.