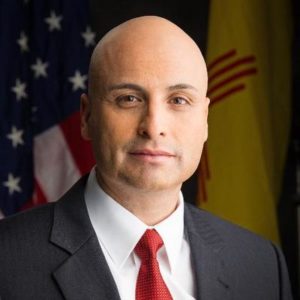 A member of New Mexico Attorney General Hector Balderas’ legal staff has been paid with private money from a group financed by Bloomberg Philanthropies to promote a climate change agenda in the state. The attorney, Robert F. Lundin, worked on the state’s climate and energy policy and is part of a national effort by a Bloomberg-funded climate activist organization to get ideologically motivated attorneys inside state offices.

Lundin’s status was revealed in a report by the Bloomberg-funded State Energy & Environmental Impact Center (SEEIC) at NYU Law. The report was acquired through an open-records request by Power the Future, a pro-energy industry group, which calls itself the voice of energy workers and opposes “radical green groups and the ideologues that support them.”

The report shows Lundin, one of New Mexico’s special assistant attorneys general, was involved in revising the state’s energy policy and outlines “the contribution the legal fellow made to the clean energy, climate change, and environmental initiatives of the [AG OFFICE].”

Lundin provided legislative analysis for the state’s Energy Transition Act, according to the report. The ETA imposes a “zero-carbon” electricity standard on public utilities by 2045. The law also sets renewable energy targets, including 50 percent by 2030 and 80 percent by 2040.

“Mr. Lundin began work on November 5th, 2018, and he was assigned primarily to public utility matters in relation to administrative litigation at the New Mexico Public Regulation Commission,” according to the report. “The Office prioritizes environmental protection, fighting for renewable energy, and promoting the labor force in New Mexico so that the State may become a leader in renewable energy development and find economic security.

“One of Mr. Lundin’s primary tasks during the early months of 2019 was to objectively analyze legislation proposed in the 2019 New Mexico Legislative session,” the four-page report says. “Mr. Lundin reviewed and analyzed a draft version of the bill before it was introduced to the legislature. He reviewed and monitored the progress of two proposed community solar bills during the legislative session.”

The report also says Lundin had a hand in attempts to end coal as a New Mexico energy source.

“Mr. Lundin was involved in the on-going process to shut down San Juan Generating Station — a large, coal-fired power plant in New Mexico,” according to the report. “He and lead counsel discussed legal strategy with many stakeholders to determine a course of action in regards to initiating a proceeding to retire the plant.

“The [Public Regulation] Commission then, following the strategy … ordered the public utility to abandon the coal plant.”

The purpose of the SEEIC, created in August of 2017 with an initial grant of $6 million from the Bloomberg Philanthropies, is to promote a climate-change agenda by providing state attorneys general with paid legal staff. The report on Lundin apparently shows for the first time the modus operandi of the impact center — “allowing rich individuals like Michael Bloomberg to create prosecutorial power with the force of government,” according to Western States Director for Power the Future Larry Behrens.

According to a June editorial in the Wall Street Journal, “as of 2018 at least seven states and the District of Columbia had adopted this money-for-policy scheme.”

In the executive summary of a separate public report released in September, the SEEIC laid out its mission:

“As their states’ chief legal officers, attorneys general play a major role in clearing the path for increased clean energy in the electricity sector,” according to the executive summary. “State attorneys general have a critical role to play in ensuring that their states’ clean energy laws and policies are implemented on a timely and effective basis, and without inappropriate interference by the federal government or other parties.”

“This is an out of state billionaire paying salaries of people who are influencing policy in New Mexico,” Behrens told InsideSources. “We believe that the policy harms jobs of New Mexicans and raises electric rates. So we believe New Mexicans should know about the connection from out-of-state radical environmentalists and how they are impacting their lives.

“If the roles were reversed, if there were — let’s say — a large oil company or a large coal company paying to have someone on the staff of the attorney general’s office or the New Mexico environmental department there would be outrage,” Behrens said.

“New Mexico attorney general employees are not supervised, directed, or controlled by NYU or the State Impact Center,” Baca told InsideSources. “The attorney general’s office only represents the people of New Mexico, from maximizing trust royalties from oil and gas revenue for school children to ensuring that indigenous communities are protected from further environmental pollution.”

However, Balderas has previously been quoted as saying his office “would work with the NYU Law Fellow to identify ‘pressure points’ on which litigation can be used to most effectively influence policy.” Identifying pressure points, critics argue, is a political partnership that raises questions about private money in a state agency.

Similar arrangements have come under fire in Massachusetts and Oregon, and in Virginia the legislature blocked the arrangement, arguing that it violated state law.